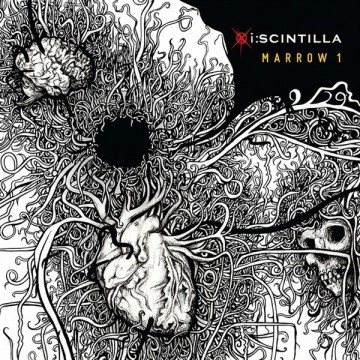 We live in a world of right and wrong, two paths that split the earth in two. The path we choose is solely based on our habits and attitudes, for once we venture on it is rather difficult to turn back. For far too long people have shied from an all too factious possibility that these paths may intersect at some point in time. It is a conversation most keep at bay, but what if I told you the paths have already started to join? Nowhere is this more evident than in I: Scintilla’s 2012 release Marrow I, an album that reinvents the wheel. This outdoes everything the Chicago-based band has produced so far; this experiment is one of soothing temperament that could very well wind up in a soundtrack someday.

Listeners can expect shock and awe from the get-go with “Drag Along,” a plodding concentration strung by consistent acoustics. The band then adds depth to Devo’s “Girl U Want” before an intimate and immersive ending steps in. “The Shake” acts like a dim torch burning to its own destruction, as it passes tombs of music’s past. Marrow I strips the heavy Electronic elements away from I: Scintilla’s infamous sound, breathing a new acoustic life into frontwoman Brittany Bindrim and her bandmates. Sometimes right and wrong are closer than we think, yet it takes careful observation to weed out the good from bad. The dark is an alluring thing and is not as mischievous as we are led to believe. Light can in fact survive within, so summon whatever strength you can and enter.

J.R. Leyvas is a Freelance Writer / Music Journalist / Aspiring Fantasy Novelist / Playwright / Screenwriter from Orange County, California. J.R.’s work has appeared in Amplifier Magazine, TrendLand Magazine, Zouch Magazine and The Spill Magazine. J.R.’s passion for the underground music scene stems from his obsession with Incubus’ “Drive”. To him, everything is a song. He can be reached via email.
RELATED ARTICLES
album reviewsi:scintilla
7.0