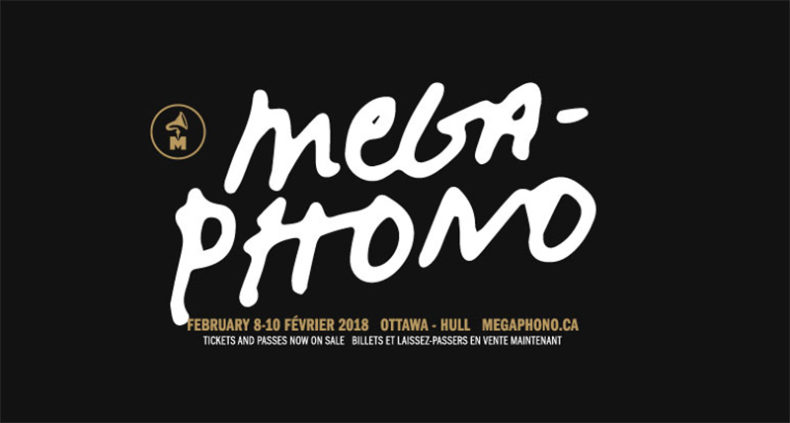 Now on its fourth year in Ottawa, Megaphono’s objective is clear: Bring Ottawa’s music scene back to life and make it so artists and industry workers alike don’t have to head out to Montreal or Toronto to pursue a career. The festival offers both a massive amount of shows throughout the city as well as a well-rounded spectrum of conferences with topical conversation.

Opening Friday night’s Megaphono show at the NAC was Ottawa’s own Keturah Johnson, who performed like she was the main act, putting on a tough show to follow. The first performance is almost never the best performance of the night, and while the other two acts were also captivating, Keturah’s really stood out. Taking the stage as a one-woman band, she noted that usually she plays a lot of her band’s (The Heavy Medicine Band) material, but she would be playing solely her own material at this show, and that decision was well-received as the show continued. Performing as a solo act would not be possible without the aid of things like looping machines and multiple mics with different effects, especially if you are putting out a sound like Keturah’s, and she thrived in her fluid use of these things. Her attire gave off a bit of a ’70s vibe, with a long yellow jacket on top of a long-sleeved green dress, but there’s really nothing that can distract from a truly stunning voice like hers, especially with such a strong range and creative use of vocal effects. While she was only slotted enough time to play about four songs, closing with “Conduit” left the sold-out crowd anxious for her next performance.

Coming on second was a band called LUKA, from Toronto. Frontmen often come out with strong energy and somewhat of a showboat attitude, but that was quite the opposite of the case here. LUKA could be mistaken for Kurt Cobain if he shrunk a bit and grew his hair out. Laid-back and seemingly very down-to-earth, love was a standout theme in the songs. The best songs make you think, and their lyrics are almost spoken word at points, with a Tom Waits feel and a lot of sentiment. Midway through the set, LUKA made a point to give due gratitude to the organizers who invited them and noted that they were the first people to bring them to Ottawa to play, three years ago. Their latest album was released this past October and there’s no doubt that their last four copies were sold at the show. While the faint, soft music faded ever-so-smoothly and twirled into strong psychedelic instrumental solos, the flute was most prominent throughout.

Looks were quite deceiving during the last act. When you see such a tiny little girl take the stage, you don’t really know quite what to expect, but it’s definitely not the strong and entrancing vocals that Trails belted out to show why she held the headlining slot. Misleading all the way to the first note sung, Trails introduced herself and her band for the night with a soft voice. “I am Trails and this is my band that’s playing with me tonight. Maybe tonight we’re all Trails, it’s up to you,” she said before leading into a set you couldn’t take your eyes off. Although she was admittedly shy — “I’m not so good at talking on stage, but I’m very grateful to be here” — she was still giggling with the room at moments. Just when you thought you wouldn’t be surprised again, the night closed off with her bandmate playing a song that required a chord that had snapped on his bass, flawlessly.

Megaphono continues Saturday, and has enough acts at enough scattered locations that there is something for everyone, somewhere. A full list of conferences and shows can be found on the Megaphono website HERE.

Megaphono is an Ottawa-based music organization, focused on spreading the word about Ottawa music, and helping to create opportunities for Ottawa-based artists.

Megaphono is also the namesake of music showcase festival, which takes place February 8-10, 2018.

Megaphono welcomes music industry players from the US, Canada and beyond for a 613-centric music experience. Booking agents, film & television music supervisors, record labels, music publishers and festival directors will be on the guestlist, brought to town to hear the latest sounds from Ottawa and Eastern Ontario.

Music makes the worst situations bearable and the best situations even better. I'm just here to share the inside scoop and anything you may have missed, while I establish my own voice in the industry. Born and raised in Ottawa, I never go anywhere without a set of headphones. Live music has been my vice for as long as I can remember and sharing stage side stories is a major bonus.
RELATED ARTICLES
live reviewlukaottawa