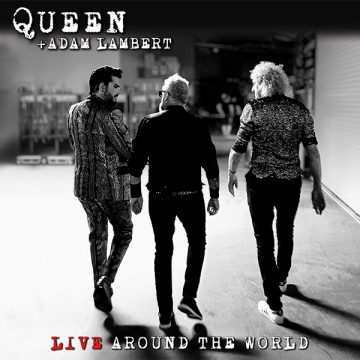 Queen and Adam Lambert have been touring around the World in recent years, and have put together a live album highlighting some of their shows.

Live Around The World leads with the energetic “Tear It Up”. Lambert’s strong vocals make him the perfect replacement for the late, great Freddie Mercury. If anyone can deliver the strong, vibrant vocal range that is nearly identical to Mercury’s that is needed to maintain the integrity of his songs, Adam Lambert can. Queen has maintained global popularity despite Mercury’s absence, and the addition of Adam Lambert has given fans worldwide the chance to keep some of their biggest hits alive through the still amazing performance that Queen delivers.

Queen dedicated “Who Wants to Live Forever” at their Isle of Wight Festival in London in 2016 to the victims of the Orlando nightclub shooting, and this performance is on the album. The audience participation in “Love of My Life” is moving. The album makes you feel like you are right there at the show, you can feel the energy in the crowds and the genuine love for the music.

The remaining tracks are from the Fire Fight Australia show earlier this year, the last before lockdown. It is the same set in its entirety from the unforgettable 1985 performance when Queen made history at Live Aid.

This album is proof that the world welcomed Lambert with open arms to carry on the legend that is Queen.

Melinda Welsh is an American blogger and music enthusiast, who grew up in the 70s and 80s and is passionate about all kinds of music, listening to any kind of music that she can get her hands on. Her tastes vary from country to hard rock. She can be seen wearing ear buds at work, reading music magazines and articles online, and following bands on Instagram and Facebook. Her favorite quote is "Where words fail, music speaks".
RELATED ARTICLES
album reviewalbum reviewsfreddie mercury
8.0