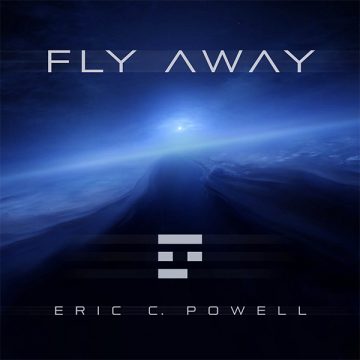 Fly Away is Eric C. Powell and Andrea Powell’s fifth album and their second for 2020 (Mute was released earlier this year). The sheer quantity of music would be cause for concern, in that, how can an artist keep releasing consistently great music. The answer is ‘I don’t know’, but what I do know is that Eric C. Powell and his wife Andrea Powell do just that and have come up with another fantastic electronica album.

Eric provides the well-structured and arranged music, while Andrea provides the angelic, almost otherworldly vocals. The two combined make incredible music, focusing on strong melodies. Sure, the cool effects on vocals and synthesizers are there, but the root of the album is that it is made up of wonderful and moving songs. Eric creates the atmosphere, almost like a soundtrack, while Andrea writes her own script for the songs.

A couple of the songs are older, by a mere few months, and while they worked s standalone singles, they all fit nicely together on this album. “Shattered” comes to mind, both as a remix by Andrik Arkane but also when they have special guest Stereo In Solo add more components to the stellar song.

Although Andrea does vocals on most of the songs, Eric deserves credit for the tracks he sings, especially the stunning “And I Know” and “The Bedside Table”. When they sing together, their voices blend flawlessly and add to the overall effect of the music. As well, the lyrics are important to the Powells. Much like the classic early 1980s synthpop, there is a great deal to the songs.

There is a lot here to discover, such as  the darkness in the album.. “On the bedside table lies a gun” is the first line of “The Bedside Table”.  Any song that opens with that line is not going to be your run of the mill love song, nor is it going to end well. Quite the opposite. But that is the beauty of Fly Away, among the heartbreaking and beautiful melodies there is darkness, not unlike life. Perhaps that is the overall theme of the album, in darkness there is beauty, and vice versa.

And that is the secret of the album. It requires multiple rotations on the turntable. It is the kind of album that grows stronger with each spin. It is instantly accessible but the depth and complexity of the album only comes to light with each listen. The trademark of an excellent album.

Fly Away is a fantastic album, and Eric C. Powell and Andrea Powell have come up with another home run. It is a strong album from beginning to end, with many great songs that all fit together like an ingenious puzzle. This is a highly recommended album for synthpop fans and anyone who just digs unique, creative, intelligent and excellent music.