SPILL ALBUM REVIEW: PRIMAL SCREAM – GIVE OUT BUT DON’T GIVE UP: THE ORIGINAL MEMPHIS RECORDINGS 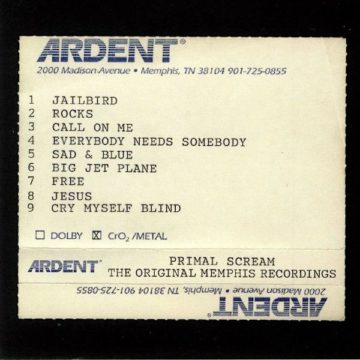 Primal Scream
Give Out But Don’t Give Up: The Original Memphis Recordings
Sony Music

Recasting their 1994 album Give Out But Don’t Give Up as a rock traditionalist’s record, Primal Scream has unearthed The Original Memphis Recordings. These are the ‘untouched’ tracks they recorded at Ardent Studios with the Muscle Shoals Rhythm Section, The Memphis Horns, and legendary producer Tom Dowd, who had worked with Ray Charles, Aretha Franklin, and Otis Redding. When they failed to capture some of Elvis Presley’s and Dusty Springfield’s Memphis magic, the Glasgow band overdubbed, remixed, and re-recorded the tracks.

Intended to showcase Primal Scream’s country and soul sides, the music on The Original Memphis Recordings indeed has the feel of old friends playing and singing in a big room after some home cooking. Tom Dowd’s mix opens space for Wurlitzer organ, honky-tonk piano, and a growling harmonica to shine; “Sad and Blue” actually sounds like the blues! The stars of this recording are the horns and the gospel backup vocals led by Denise Johnson, transforming “Big Jet Plane” and “Everybody Needs Somebody” into spirituals. Wisely trimming to nine tracks, the band unfortunately discarded their weirdo funk excursions with George Clinton, i.e., the most interesting songs on the bloated Give Out.

It’s a conundrum: do you want post-modern polish, or do you want privileged authenticity? Turns out they pretty much sound the same! Long criticized for making “record collection rock,” Primal Scream is well known for its expertise appropriating the past. When MTV introduced them to America in 1994 with the “Rocks” video, they looked and sounded like another Stones-influenced throwback, The Black Crowes. To indie rock fans already familiar with Primal Scream from their UK acid-rave glory, a bunch of pale, skinny, Scottish dance-punks on drugs paying homage to rock tradition seemed disingenuous. Twenty-five years later, releasing the inessential Original Memphis Recordings is scant redemption.

SPILL ALBUM REVIEW: PRIMAL SCREAM – GIVE OUT BUT DON’T GIVE UP: THE ORIGINAL MEMPHIS RECORDINGS

Charles T. Stokes is a nonprofit resource development coordinator and donor researcher based in Denver, USA. He’s also a tennis player and writer looking to make a racket with his own noises. “There are places in the world where one cannot publicly listen to or perform whatever music they choose without fear of harassment or prosecution. The freedom to write about new music is power, a privilege.”
RELATED ARTICLES
album reviewalbum reviewsprimal scream
7.0