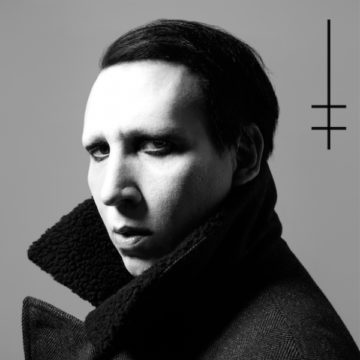 It seems this past week or so has been a buzz of news surrounding The Anti-Christ Superstar, Marilyn Manson. First there was the report that he thought he may have broken his ankle at a recent show. While this proved to not be the case, the following night, two stage props collapsed from the rafters, landing on Manson mid-concert. While the extent of his injuries are currently unknown, Manson has since canceled a chunk of his tour, including a show at Toronto’s Rebel. This coincides with the release of Manson’s triumphant tenth record, Heaven Upside Down. The album that was originally titled Say Ten is not short in controversy and sonic debauchery, and serves as the perfect follow up to 2015’s The Pale Emperor.

The album opens to the eerie, clinical, and mechanical sounds of “Revelation #12”, a heavy and relentless track that sets the tone for the rest of the album perfectly. Manson, ten albums into his career, forty-eight years old, is as aggressively charged as he has ever been in his career, and in some ways, he is even surpassing some of his more outrageous periods.  Musically, Heaven Upside Down is an electrifying record, and features film composer Tyler Bates as a co-writer and co-producer — just as The Pale Emperor did. I’ve said it before and I stand by it still, Bates and Manson are an incredible duo, as Bates gives the music a level of depth that Manson’s music has never quite reached; ultimately allowing for Manson to do so much more vocally. From the throaty screams of the politically inspired “WE KNOW WHERE YOU FUCKING LIVE”, to the haunting swagger of “KILL4ME”, and to the bellowing calls from the album’s slower and emotional intense closing track “Threats Of Romance”, Manson sounds incredibly powerful and at times, twisted and demonic.

Heaven Upside Down is a very interesting album musically. While it picks up on the heavy distorted rock and gothic pop of The Pale Emperor, it is almost as if every aspect from that record has been pumped up with steroids along with an assortment of other illicit contraband. Manson seamlessly combines ’90s industrial rock and metal inspired instrumentals with electronic textures and effects from the late 2000’s and 2010’s. On paper, this sounds dated, while on “Tattooed In Reverse” it has never sounded more fluent, innovative, and exciting, making it one of the best tracks on the record. Quite similarly, “KILL4ME” is driven by an infectious and funky groove and pop sensibilities, as is “JE$U$ CRI$I$”– with the exception of the incredibly heavy breakdown in the middle. While these are certain to become live favourites and classics of Manson’s modern era, Manson has always been at his best when he sounds violent. Songs like “WE KNOW WHERE YOU FUCKING LIVE”, “Revelation #12”, and “Blood Honey” capture a level of instability and disparity that only Manson could reach while still sounding like the most dangerous motherfucker there is.

As a whole, Heaven Upside Down is an excellent record that can be seen as one of the best musical directions he has taken since his earliest days, making him one of the few artists whose modern body of work is equal to — and in a handful of instances, better than — that of his classic material.  Heaven Upside Down, while continuing on the path Manson and Bates started with The Pale Emperor, contains hints of Manson’s old work in the sense that while clearly relating to industrial metal and punk rock, is built on a foundation of grooves and pop sensibilities. Ultimately, Manson is redefining the gothic aesthetic with Heaven Upside Down, a record that is not only among Manson’s best work, but will certainly be a favourite release for the year.

A passion for music has always been a part of Gerrod’s life. As a young boy, he was raised on a steady diet of the music from The Chili Peppers, Aerosmith, The Stones, Prince, and others from his mum. Raised in the GTA, Gerrod continued to foster his love for music by attending a wide range of concerts and learning the drums. His unapologetic passion for music has no bounds and has spread to a wide variety of styles, whether it be the 90’s rock that sound tracked his teenage years, the jazz he studied in university, or his newfound love for hip-hop. He recently received his bachelors in music and education from York University and is passionate about writing and reviewing good (and less than good) music. Gerrod is also the drummer and songwriter for a Toronto based rock & roll band, One In The Chamber.
RELATED ARTICLES
album reviewsheaven upside downloma vista recordings
8.0