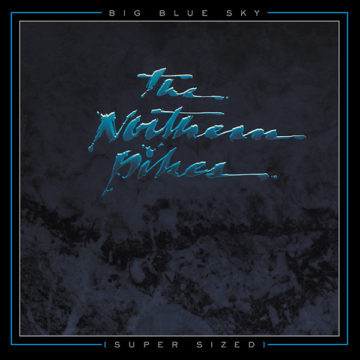 Although I love The Northern Pikes, I have not pulled out my copy of Big Blue Sky in a few years, so when I approached this 30th (30th!) Anniversary Super Sized version of the album, I was somewhat worried it would sound dated. I needn’t have worried. The second the first track “Teenland” filled my speakers, I was not only transported in time but also amazed at how good this music sounds 30 years on.

The remaster of the studio album is brilliant. It leaps right out at you and sounds fresh, vibrant and brand new. The songs have aged well and it becomes apparent just how talented The Northern Pikes were. For this album the line-up was the original four piece line-up. Jay Semko (bass, vocals and writer), Bryan Potvin (guitar, writer), Don Schmid (drums) and Merl Bryck (guitar). For the record Semko, Potvin and Schmid have regrouped for a tour to support this reissue, with Kevin Kane (Grapes of Wrath) filling in for Bryck.

The four piece put together an astounding album with little or no filler. Semko handles the writing for the most part and he uses the album like a blank canvas and fills it in with great music and lyrics. Semko does join forces with Potvin on the more pop oriented “Jackie T”, a standard Northern Pikes song that does not stand out nor does it distract. And also Bryck and Potvin on “You Sold The Farm” and Bryck on “Love and Muscle”. But this is Semko’s album in terms of writing.

Semko kicks it off in style with “Teenland” and delivers one of the highlights in “Things I Do For Money”. This is a moody piece that simmers and just astounds the listener. Great lyrics too. The band plays together beautifully and the end result is a near perfect pop/rock album. It is worth noting that a few of the songs had appeared previously on their first two independent releases, but here they are more polished and as such the album has a strong consistent flow to it.

This being a Super Sized edition of Big Blue Sky additional material has been added. Again, the band has chosen wisely and as a result there are bonus songs that will get played as much as the original studio album. Ten demos are cleaned up (but nothing added) and sound great. Again, the band made a decision to add songs that are not on the album, rather than demos of the songs that already appear on the album. There are some real gems here. “Look Out Below”  and “Stay WIth Me Now” have some beautiful playing and could have gone on to be classic Northern Pikes songs. They are classic, but sound unfinished (I know, they are demos). The ten songs are well worth listening and a welcome addition.

Further, there is a live album recorded at The Horseshoe Tavern in Toronto on September 27, 1986. This was originally recorded for radio broadcast and sounds fantastic. The Northern Pikes were always loud and exciting live and the songs practically leapt off the stage. Not aggressive but more in a rocking, inviting manner. This is an excellent live recording with no overdubs and just the band as they were, a tight rock outfit with some very cool songs.

Fans will love this reissue. It may even win over new fans. The Northern Pikes were huge but in a way never got the respect they so richly deserved. This may set the record straight. An excellent repackage and the bonus material is stunning. Perhaps it is time to revist their other albums in a similar fashion, but until then (and until I can catch them in The Mod Club in Toronto), this package will be played in my car and home.

Born and raised in Whitby, Aaron discovered music through his love of The Beatles. This led to a career in radio, writing for various publications, and ultimately a radio show about The Beatles (Beatles Universe), which ran for over four years. When not immersed in music, Aaron enjoys spending time with the loves of his life -- his wife Andrea, and daughters Emily and Linda (all of whom have an intense love of music too).
RELATED ARTICLES
album reviewsbig blue skybig blue sky (super sized)
10