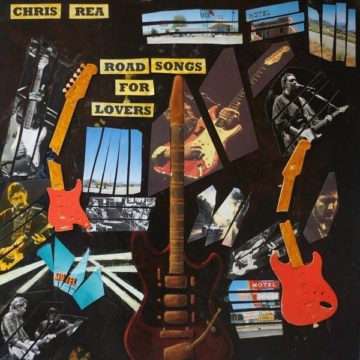 The return of Chris Rea, not that he disappeared or that it has been that long between records, but Road Songs For Lovers feels like a return. Not a comeback, just the return of a good friend.  It is hard to believe that Road Songs For Lovers is Rea’s 26th album since he debuted in 1978 with the wonderful Whatever Happened To Benny Santini and  his first album of new material since 2011’s Santo Spirito Blues.

This album is a welcome return to form by Rea. He does what he does best on this album. Blues infused rock songs, with brilliant guitar work and strong vocals. Rea’s voice just gets better with time and on this album, his playing is perhaps some of his best ever.

The rock songs are there, and so are the ballads. And although the rocking songs are brilliant, it is the ballads that steal the show here. Listen to his vocals on “Beautiful”, it is heartbreaking. And the production is sparse and not cluttered like so many other albums. Here, the piano, and sax carry the song with Rea in the spotlight bringing the listener along with his incredible vocals. It is the perfect way to end the album. No pun intended, but simply beautiful.

The same can be said for the other ballads on the album. One of the highlights, “Breaking Point” is stunning in its simplicity. The guitar along with piano just create a mood that is almost of another world. It is almost like a John Cale song, even the lyrics, “He never said nothing, because he had nothing to say…they say when you break down, you are the last to know…no cries of attention, just seems like he let go…ah the breaking point”. Moving and coming from Rea’s voice it is almost too much at times, and his slide guitar at the end is the icing on the cake. A classic.

Rea has been doing a lot of blues based albums in the past few years. Although there is a definite influence from the blues, this is a more mainstream album from Rea. Again, the return of Chris Rea, and he seems to do it effortlessly. But that does not mean he has not put his heart and soul into the songs. This album seems very personal at times, and highlights his ability to create stories. The characters in these stories suffer loss and love. Nothing new, but in Rea’s hands, it is the feeling and the depth of that feeling that makes the album stand out.

This is a major work of art and should be viewed as such. Yes in many regards it is a traditional rock album, but again, it is exceptional. Young artists would do well to study this one, it really could be a blueprint for how a good rock album should sound. By all rights this album should be a huge album, and return Rea to the top of the charts. I don’t think Rea does music for that reason. Listening to this album, one gets the impression that he needed to record this album and express his thoughts and feelings. I am sure if it is a hit he will be pleased, but it is not the motivation. This album is art.

I am glad Rea has returned, and I am extremely glad he brought Road Songs For Lovers with him. It is a stunning album, and as the year winds down, it is certainly yet another album contending for album of the year. It is certainly one of his best albums, and that is saying something.

Born and raised in Whitby, Aaron discovered music through his love of The Beatles. This led to a career in radio, writing for various publications, and ultimately a radio show about The Beatles (Beatles Universe), which ran for over four years. When not immersed in music, Aaron enjoys spending time with the loves of his life -- his wife Andrea, and daughters Emily and Linda (all of whom have an intense love of music too).
RELATED ARTICLES
album reviewsbmg
7.0