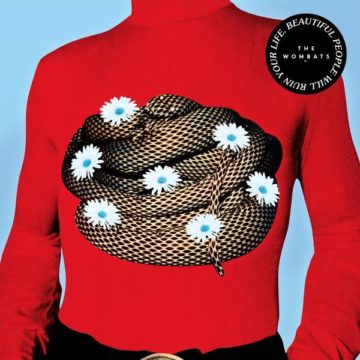 Melodically, Beautiful People Will Ruin Your Life is as catchy and hook-drenched as any of their previous releases, and in some cases, most notably “White Eyes,” “Dip You in Honey,” (though, is it me or does the main riff sound a lot like Oasis?) and album closer “I Don’t Know Why I Like You

But I Do,” more guitar-driven than ever before. Songs like lead single “Lemon to a Knife Fight” and album opener “Cheetah Tongue” are obvious examples of the band’s consistent and gradual musical evolution, both lyrically quirky and musically catchy but with a more mature approach to instrumentation and song structure.

For all that musical and melodical growth, lyrically this album seems like a step backwards. Gone are the clever combinations of metaphors and youthful desperation, replaced here by much more obvious (and boring) phrasing, and with all the quirky desperation of Murphy’s past failed (and idiosyncratic) relationships replaced by much less creative (“bog-standard,” as they’d say on that side of the pond) and more direct lovelorn complaining. Maturity breeds a different type of feeling, surely, but in this case it has also stagnated Murphy’s usually-brilliant comparative phrasing. Falsetto-filled “Black Flamingo” is the most unfortunate example of this, including the refrain “I want to love you but it hurts, hurts, hurts . . .” You’re better than that, Matthew.

Overall, this is a solid album musically with a lot of obvious growth and maturity, but minus much of the quirky lyrical urgency that has come to be a hallmark of the band. Still a very solid release, but not nearly as lyrically arresting or even laugh-out-loud as past offerings.

Here's what we think...
Spill Rating
Fan Rating
Rate Here
New Criteria
10
7.6
7.0
Total Spill Rating
7.6
Total Fan Rating
26 ratings
You have rated this
Album Reviews
album reviewsbeautiful people will ruin your lifecheetah tonguedip you in honeykobalt music recordingsout of my headthe wombatsturn
album reviews, beautiful people will ruin your life, cheetah tongue, dip you in honey, kobalt music recordings, out of my head, the wombats, turn
About the Author
Br.

Br. lives in southern Ontario, grew up on The Beatles and The Journeymen, spent his adolescence immersed in grunge, and his adulthood in British alternative. His greatest joy is seeing his son dance and grow into his own appreciation of the indescribable joy of music...
RELATED ARTICLES
album reviewsout of my headthe wombats
9.0