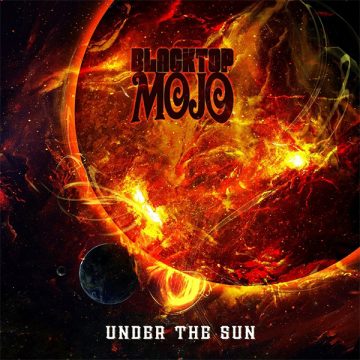 Blacktop Mojo
Under The Sun
Independent

Two years ago, Texas’ very own Blacktop Mojo made waves among the growing rock ‘n’ roll revival which seems to be sweeping the world with the release of their sophomore album, Burn The Ships. The album pushed them to the heights of being among the most promising up and coming bands. Now, they have returned with their follow-up album, and third full length release, Under The Sun, a record which perfectly capitalizes on their current momentum and exceeds their previous work.

To say Blacktop Mojo set the tone with a truly explosive opening track is something of an understatement. “Lay It On Me” is driven not only by a crunchy, killer riff, but goes on to feature a chorus that is nothing short of epic, and the band even finds time to fit in a fiery guitar solo that if you’re not paying attention, you’ll tear all hell apart through your speakers. If “Lay It On Me” doesn’t immediately pull you in with its sheer intensity and power, then I don’t know what will.

Unsurprisingly, Under The Sun is full to the brim with hard-hitting tracks the likes of the Guns N’ Roses inspired “Come Get Your Coat”, the sludgy steam roller that is “All Mine Now”, and the lead single, “Can’t Sleep”, to name a few. While it goes without saying that Blacktop Mojo are performing at the top of their game as a premier up and coming hard rock band, it is the slow, sauntering, and quiet blues of “It Won’t Last” that perhaps best steals the show. The emotional sway of the track plays off of a traditional blues structure, bringing it to life in a powerful and modern context as the song grows organically to an incredibly climatic and bombastic closing.

In short, Blacktop Mojo is killing it on Under The Sun; ultimately proving beyond a shadow of a doubt that they’re truly among the most promising new rock bands around. I knew this was one of those bands to watch out for, but after hearing “Lay It On Me”, Blacktop Mojo sounds hungrier than ever to break on through to the next level; one which, if Under The Sun is any indication, they very much deserve. Similarly, the closing title track proves to be just as exciting of a conclusion as “Lay It On Me”, effectively bookending a very strong album with two absolute bangers. Between those two, “Come Get Your Coat” and “It Won’t Last”, Under The Sun is a must-hear for rockers everywhere while being the album that fans of Blacktop Mojo have long been waiting for.