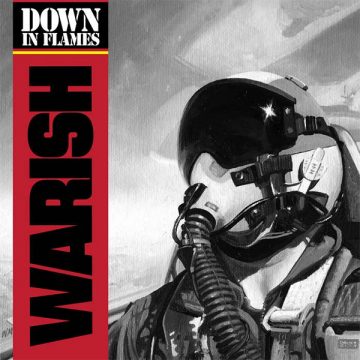 Tony Hawk’s Underground – yes, the 2003 video game – turned a whole generation of those too young to fully enjoy the ‘90s onto a wave of alternative rock and underground punk music. It comes as no surprise then that his son’s band, Warish, boasts a sound that fits perfectly between Nirvana and The Misfits. What’s even wilder is that they actually do. Hot off the RidingEasy Records roster, Warish have returned with their debut full-length album, Down In Flames, which follows their debut self-titled EP, released earlier this year.

Coming off the whirlwind of fuzz-laden guitars that is the opening track “Helter Skelter”, had I not known better, I would have assumed was a newly unearthed and unreleased Nirvana track in tone with “Territorial Pissing” and “Scentless Apprentice”. To say I was hooked by the halfway point of the album opener would be an understatement. Tracks like “You’ll Abide”, “Bleed Me Free”, and “In A Hole” further this sound. “Helter Skelter”, however, is not only a killer opener, but also the strongest track on the record.

Beyond the obvious punk and grunge roots, there are elements of modern stoner and sludge rock on Down In Flames, adding more dimension to the band’s sound and songwriting style. “Shiver” stands out as one of the strongest while feeling oddly reminiscent of the desert rock from Kyuss.   That being said, by the time you hit the 11th track, much of the record begins to blur together rhythmically, structurally, and tonally. Down In Flames is a good album, however, it could have been a great, perhaps even shocking, EP.

While they may not exactly be charting new territory, Warish has delivered a lofi and grungy heavyweight that hits you like a sledgehammer to the side of the head with a solid sophomore release. The music certainly fits in with the late ‘80s, Proto-Grunge era, when the genre was more punk-fueled and raw and could only be found emanating from a teenage house party or the grimiest of basement dive bars. Down In Flames is nostalgic for such a time, but comes off as incredibly refreshing as there is such a lack of rough and raw punk music in today’s musical climate – often the genre finds itself leaning too heavily on either metal or pop – making the record, and ultimately Warish a truly unique musical experience that – with two full-length albums released this year – are proving to be truly relentless.

A passion for music has always been a part of Gerrod’s life. As a young boy, he was raised on a steady diet of the music from The Chili Peppers, Aerosmith, The Stones, Prince, and others from his mum. Raised in the GTA, Gerrod continued to foster his love for music by attending a wide range of concerts and learning the drums. His unapologetic passion for music has no bounds and has spread to a wide variety of styles, whether it be the 90’s rock that sound tracked his teenage years, the jazz he studied in university, or his newfound love for hip-hop. He recently received his bachelors in music and education from York University and is passionate about writing and reviewing good (and less than good) music. Gerrod is also the drummer and songwriter for a Toronto based rock & roll band, One In The Chamber.
RELATED ARTICLES
album reviewalbum reviewsdown in flames
9.0