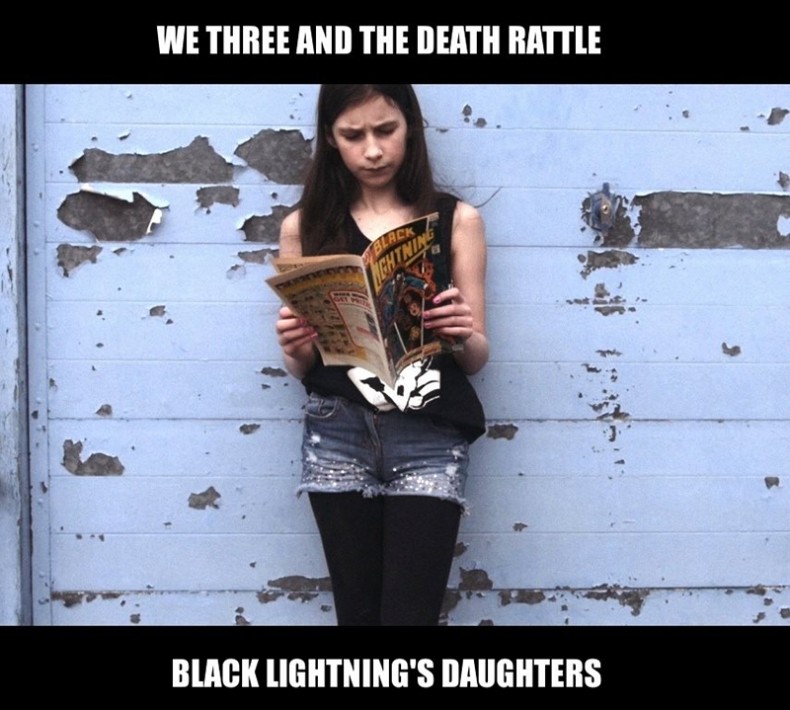 We Three And The Death Rattle – “Black Lightning’s Daughters”

We Three And The Death Rattle, the U.K.-based indie rock trio comprised of Amy Cooper and brothers Jon and Andy Bennett, strikes fast and hard on its second single “Black Lightning’s Daughters” and the accompanying video. The band blends garage-rock rattle with blues-rock grooves and a post-punk atmosphere on its menacing, but rousing tunes. Cooper paints vivid scenarios with the lyrics, dropping her words with cool confidence.

Striking first single “Stray Rounds” came out this past November and the electrifying follow-up “Black Lightning’s Daughters”, off of upcoming sophomore album Entrances & Exits, will be available via PAW//PUR on April 15th. A gritty barrage of droning organ notes, distorted guitar grind, and rhythmic drum and cymbals kinetics drives the sonic storm forward while Cooper sing-talks in a tough-as-nails tone that “This world is going down…”

The video for “Black Lightning’s Daughters” is a visual representation of the stark lyrics where Cooper tells the tale of a population weathering the turmoil of its self-created problems. A maelstrom of lights and shadows assails the eyes as flashes of found-footage of destructive events are superimposed on close-ups of Cooper’s unflinching gaze. Electric towers and houses are blown to bits, explosions of earth raise massive plumes of dust, multi-lane highways are congested with traffic, and extremely warped suspension bridges twist in the wind.

Amid the human-induced catastrophes are shots of a young girl, who is the key to the future of this world, reading a ‘Black Lightning’ comic book and, quite appropriately, wearing a We Three And The Death Rattle shirt. She could be making changes for the better, but wastes her time with her head down in a pile of comics – trading in real life for a fantasy universe.

“Black Lightning’s Daughters” is a warning and wake-up call for the current generation to break free from the emotional apathy and disconnection of numbing prescription meds, thankless dead-end jobs, and disinterest/self-interest. It’s time to get off that couch and get something positive done.