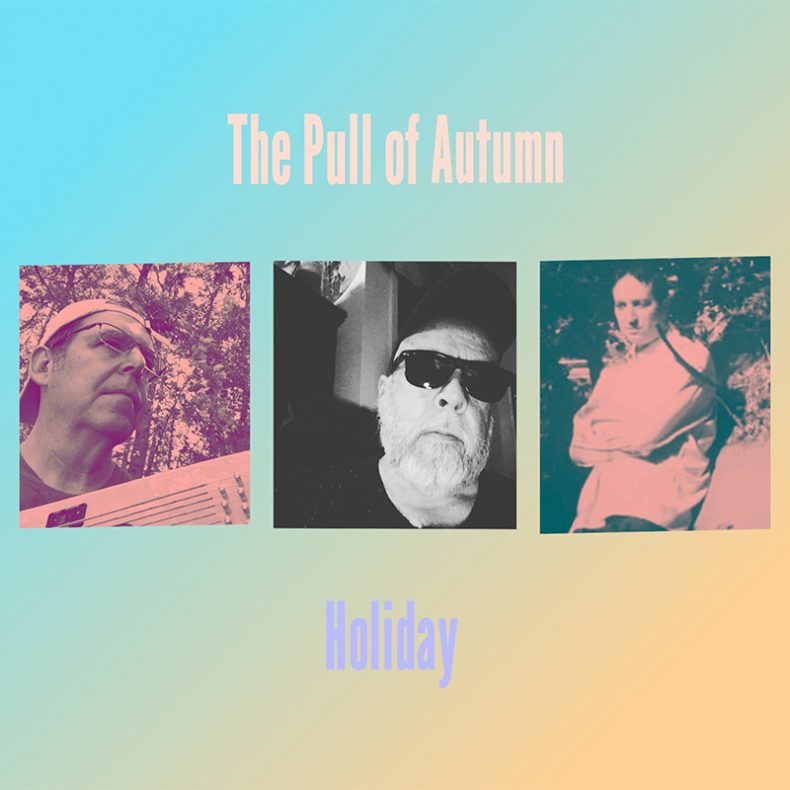 Boston is known for spawning some pretty amazing music over the past few decades. The list of bands in the indie / college rock realm is too exhaustive to even mention. Today we have the pleasure of presenting another artist based out of the Boston / Rhode Island region, who we have covered before on several occasions. However, the scope of their artist involvement is so much wider, with collaborators from several continents now involved thanks to the power of the internet.

On this latest single ‘Holiday’, the art rock collective teamed up with Orange Cake Mix (a.k.a. James Rao) – this is actually a remake of The Bee Gees’ track, which the band says is a tribute to the 60s with an added electronic element, melding 60s pop into today’s post-rock movement. This is a stellar universe of its own, mixing elements of Brian Eno, Slowdive, Kurt Vile and Mojave 3.

Based between Boston and Rhode Island, The Pull of Autumn is a ‘super group’ of sorts, with songs orbiting around Daniel Darrow from Johanna’s House of Glamour and Luke Skyscraper (Fashion), but also involving numerous emerging and notable musicians from the local music scene and from far abroad.

“James Rao originally recorded the sixties pop classic on an analog 4-track recorder. We wanted to keep the raw lo-fi sound while adding a more textured post-rock sound to the mix. With use of electronic elements and synths, we blended the two elements of sound together – one 60s pop bliss and the other electronic music to create a faithful rendition that is, at the same time, engaging post-rock,” says Daniel Darrow.

This is the first taste of their new album ‘Small Colors’, to be released in autumn via Boston-based label RBM Records. The collective’s third album, this it is a tribute to many moods, ranging from British folk music and post-rock to jazz, ambient and electronic music. The album’s title represents Darrow’s return to a minimalist approach towards creating music.

“Many artists reached out to contribute to make this album a full range of interpretations of sound .It’s thrilling to have all these amazing artists join together to create 16 songs that a channel the same voice – A love of creating beauty, even in these difficult times,” says Daniel Darrow.

This release follows up the 2019 ‘Afterglow’ LP, which included contributions by members of Throwing Muses, Boyracer, Seasurfer, Orange Cake Mix, Johanna’s House of Glamour, Hood, and Nick Cave and the Bad Seeds for something quite beautiful.

Their debut album ‘The Pull of Autumn’ was released in 2018 following the single ‘Not Coming Down’ featuring Luke ‘Skyscraper’ James, frontman of British new wave pioneers (and I.R.S. recording artist) Fashion.

The full ‘Small Colors’ LP will be released on September 18 via online stores and streaming platforms like Spotify. It will also be available on CD, packaged in a gatefold 7-inch sleeve. The album can already be pre-ordered at https://thepullofautumn.bandcamp.com/album/small-colors

by SPILL NEW MUSIC on September 29, 2020
ETHAN DANIEL DAVIDSON – “I DREAMED I SAW ST. AUGUSTINE” A SPILL EXCLUSIVE VIDEO PREMIERE Come Down Lonesome is a haunting journey through the [...]

by SPILL NEW MUSIC on September 27, 2020
BORN RUFFIANS – “30th CENTURY WAR” YEP ROC RECORDS “30th Century War” could be about the forever wars – the perpetual state of war in the Middle [...]