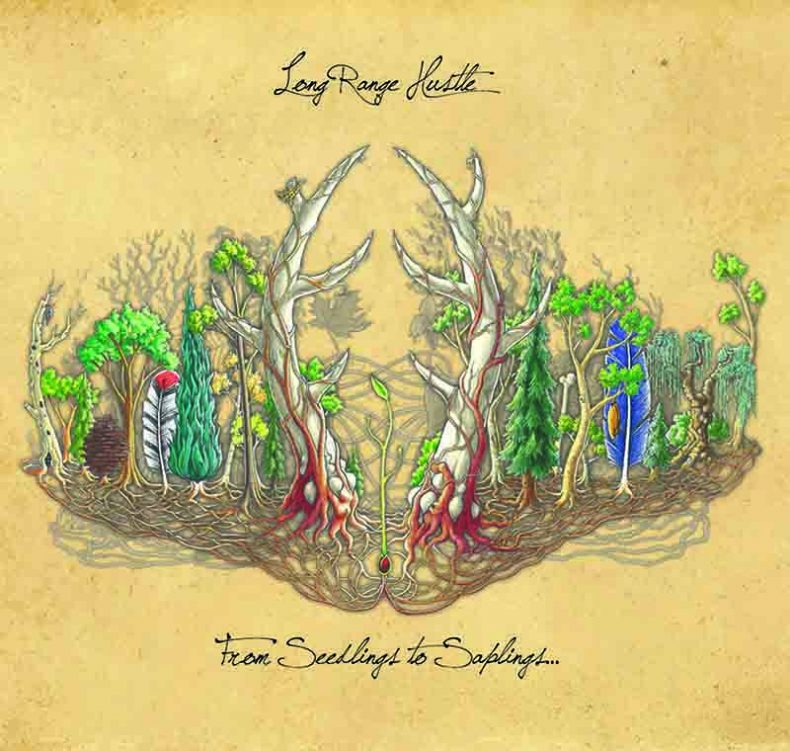 Hours before the release of Long Range Hustle’s album From Seedlings to Saplings (2015), Paul Brogee (vocals, guitar, violin), Jay Foster (vocals, piano), Mike Brogee (bass), Josh Weiss (guitar) and AJ Fisico (drums) were setting up their gear, anticipating the crowd. The band started as a collaboration between university friends in 2009, drawing on their diverse musical backgrounds ranging from jazz to rock to classical, but sharing a common love for songwriting and performing. They developed a rousing flavour of indie rock – a distinct fivepiece sound, notable for their warm infectious melodies, driving rhythms and gorgeous harmonies. Long Range Hustle’s reputation as powerhouse performers began to spread across the Toronto area, and with the release of their debut album, In Case of Fire (2010), they began touring further across Canada. Five years later, they were ready to play their hearts out releasing their sophomore effort, and they hoped the audience would be there to join them. On that warm night in 2015, the house was packed. There was a lineup out the door and down Queen St. It was a sign – this had grown into something special.

From Seedlings to Saplings captures a period of change for Long Range Hustle. It’s a long-exposure photograph of a band over the course of five years, shifting musical styles as the band evolved. You can hear the time pass as opener “Her Majesty (I, II)” kicks into “Up and Up”, a grand and sweeping proclamation leading into an upbeat dance number, a celebration of the time gone by. “Engine Parts” aches, and “Three Bells” soars, as the band found new ways to express itself over that time. It’s hard to say what comes next for Long Range Hustle, though the band’s explosive energy offers a suggestion. They’re excited, and the sweat they leave on the stage is a
testament to that. The energy comes from the thrill of change, and the new frontiers that change makes possible. They’re hard at work on their third album, more driven than ever to keep making music, and more ready than ever for what comes next.

About The Video And Album

#PaddleAwayLRH – Long Range Hustle announced today they will be releasing the official music video for “Paddle Away” on April 26th. The video, directed by Canada International Film Festival award winner Joe Swallow, was shot south of Algonquin Park at a band member’s cabin on Mckenzie Lake.

“Paddle Away” is the latest single from Long Range Hustle’s full length album From Seedlings To Saplings…. The deluxe edition of the record was released March 4th, 2016 and includes three previously unreleased bonus tracks. Swallow’s vision for the video came from “t he idea of leaving comfort and shelter to take on the unknown and find success and happiness.”

Paul Brogee, vocalist, guitarist and violinist in the band, explains the song’s origin as having a similar theme. “A few of us in the band worked at a summer camp for a number of years. It was a place that grew into a second home for us, one complete with a close-knit second family. But there comes a time when you have to leave the places of your youth and move on to different endeavours. P addle Away was inspired by that scary feeling of abandoning your familiar environment and setting out on a new adventure.”

The band will hit the road in April and May on the Spring Paddle Away Tour, from southern Ontario to Winnipeg, the hometown of lead guitarist Josh Weiss. This will be Long Range Hustle’s first foray west of Ontario and the band is eager to take their unique brand of indie rock to new markets.

Long Range Hustle’s sound – notable for evocative lyrics, infectious melodies, and gorgeous harmonies – has been a consistent theme in their music and continues to draw in new audiences through their energetic live performances. The past six months have seen LRH featured in musical showcases such as the ROM’s Friday Night Live, Indie Week Canada, Steam Whistle Brewery’s Summer Series, and Starlight’s Holiday Classic.