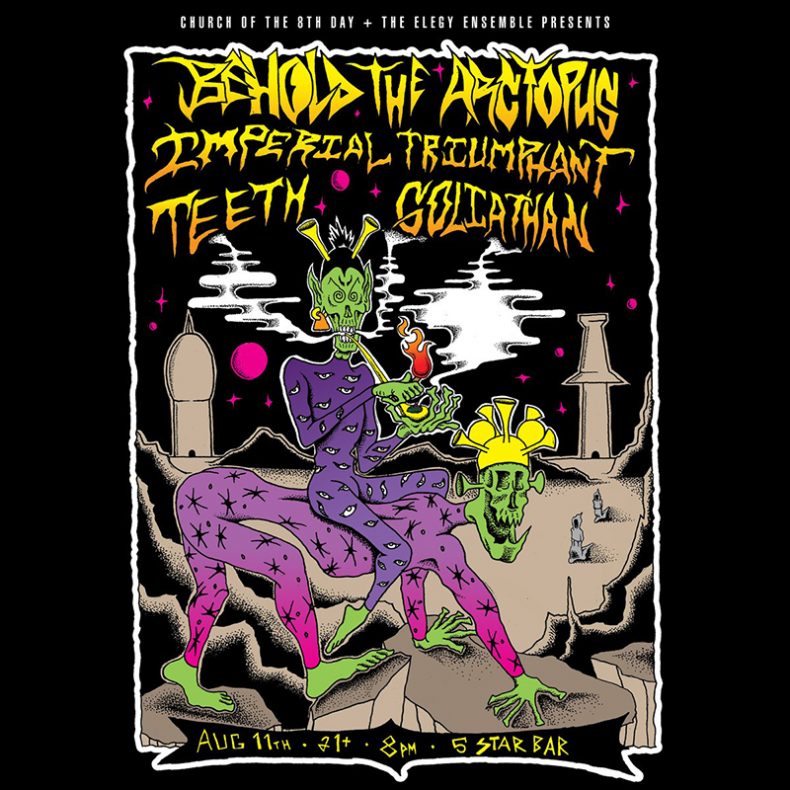 Through their alternately punishing and ethereal instrumentals, which seamlessly toggle between doom metal and blackened post rock, Goliathan tells stories as vast as geologic time itself. Tales of epic beginnings and inevitable ends, of the epochal crawl of continents, apocalyptic future landscapes and, perhaps most impactfully, of nature finally—and violently—reclaiming its rightful dominion over humanity.

Now, for the first time, Goliathan has documented one of its earsplitting live performances, at the Five Star in downtown Los Angeles, and is releasing a set of hi-quality live videos from the show. You can check out the new video for “Albion” exclusively today at The Spill.

This version of “Albion” was from a great night that Church of the 8th Day put together with our friends Imperial Triumphant, Teeth supporting, and Behold… The Arctopus headlining. Stephen from The Great Sadness drew up a rad poster for it that we had printed up. It was also our friend Diana’s birthday, and she brought the whole celebration over to the show from our forward operating base, downtown L.A. bar the Slipper Clutch. The place was packed.

The show was filmed by James Armstrong and his crew, and we had Matt Shores handle the stage lighting. The Five Star had recently overhauled their sound system as well, and after catching Qaalm there a few days prior and hearing what a great job they did with it, we couldn’t have been more excited for this perfect storm to come together.

The Five Star is one of those vital bars that books great bills like this one, but will also give stage time to new bands to spread their wings for the first time. The Redwood nearby is in this category as well. We wouldn’t be anywhere without places like this, that not only booked us early on, but eventually put us on big nights once we had our shit together. The L.A. punk/metal scene is fortunate to have these venues, and we really hope they survive.

We figured it would be one of our last big shows for a while, given that we had our eyes and hearts set on a nice pile of demos for our third album, but of course we had no idea that a pandemic was about to stretch “a while” into a brutally long year or two. Releasing these live videos, and our Artifact 10″ this past October is keeping us going, but we can’t wait to get back to the stage, and back into the studio to finish up our next album.

“Albion” remains one of my favorites, and I dare say it’s one of the best Shawn has written, not counting the new stuff we’re finishing up. It sounds like a tide coming in to me; a wave is a simple shape, repeating, in and out, but through the journey of the song, the waves get bigger, they layer over themselves, and by the time you notice the undertow has been tugging all along, you’re getting pulled under—pulled to where you’ve always been destined to go. It’s always cathartic, bringing everything crashing down at the end of the song. I often end it with bloody hands. ~Kevin Cogill (Guitarist)