Video Premiere
393
previous article
SPILL FEATURE: ALL BANDS ON DECK! - 2018 KICKS OFF A TRIO OF SAILINGS FOR MUSIC LOVERS
next article
SPILL VIDEO PREMIERE: SHEENAH KO - "WE CAN BE FREE" 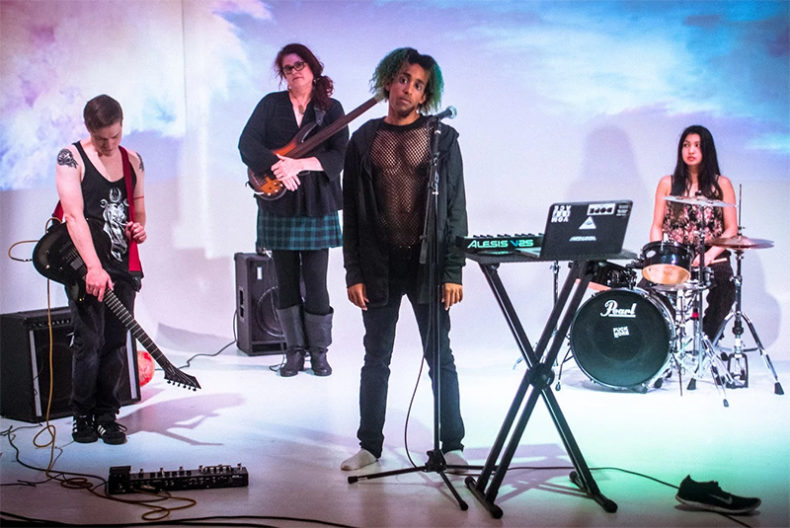 DARK SMITH – “IT GETS WORSE”

“I’m just a horribly depressed person who likes to dance whilst staring into the void,” says Tempest of his inspiration behind the band and its sounds. His guitar riffs are influenced heavily by metal and industrial music, while the dreamy synth tones touch on something otherworldly. It’s that marriage of snarling nihilism and dissonant sound. The track is a heavy one that storms out the gate, tackling everything from millennial apathy (“American youth are growing grey at the speed of crashing lights”) to societal alienation and resignation. Pronouncing the unsettling, frenetic atmosphere is Momo’s breakneck drumming and a funk-infused bass line. “I just reacted to the music and the lyrics and let the bass line grow organically to support the song,” says Lovecraft of the EP sessions, which began when the band formed in June.

The song’s music video stars Jade Dynasty, Raven Matthews and Cameron Lee Price in the roles of Mary Magdalene, Jesus and Judas. Directed by Toran Whitaker at famed Seattle art space Fred Wildlife Refuge, the video takes anachronistic liberties in a retelling of the biblical story that finds Mary Magdalene paying for the sins of mankind. Up next, the band plans to release the follow-up to the story, which casts Judas as a tormented lover in “Lie To Me”.

“It Gets Worse” is now available for streaming, with the band’s debut EP Prehysteria to follow in February 2018. Their single release show in Seattle is on Tuesday, November 21st at Fred Wildlife Refuge with Familiars and RVN.

by Brian Capitao on May 24, 2019
Dark Smith Degressive Youth Riot Records Dark Smith is a Seattle band that infuses grunge with a goth twist, taking the angst of Goth/New Wave without its pretensions. Fans of ‘90s [...]

by SPILL NEW MUSIC on May 24, 2019
DARK SMITH – DEGRESSIVE A SPILL EXCLUSIVE ALBUM PREMIERE Degressive is the second release from Seattle-based band DARK SMITH, following their debut Prehysteria in 2018. The album, [...]