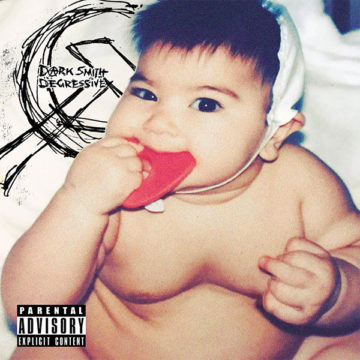 Dark Smith is a Seattle band that infuses grunge with a goth twist, taking the angst of Goth/New Wave without its pretensions. Fans of ‘90s alternative and ‘80s new wave/post punk will be delighted to hear a band that continues on a long tradition of Sad Boi music. Degressive is an optimist’s anathema.

From the languid guitars of “Waiting” or the Nirvana-like lyrics of “Ghost Me” for a millennial audience, Dark Smith create a post-apocalyptic soundtrack for misfits. The band’s strengths are the haunting vocals and atmospheric music but on occasion they dip into punk territory with mixed results.

“Seattle is Burning” is a perfect example of it working. It’s an anthem for the apathetic. While “Sadfluid” tackles issues of sexuality and patriarchy, it sounds a little too close musically to Nirvana.

Dark Smith has overt queer themes in its music. “You play with guns/ I play with Barbies” shouts lead vocalist Danny Denial on “Sad Fluid”. Their video for “It Gets Worse” from their previous effort Prehysteria has a transwoman tied to a post in the role of Mary Magdalene taking over Jesus’ role on the cross. The scene is evocative. It hints at the violence often directed at trans people and simultaneously points out religious hypocrisy.

Their music seems to be coming from an outsider perspective.

While the band calls itself “dreampunk”, I’m not sure that description is apt. Dark Smith sound more like the rightful heirs of the grunge scene than anything. Their angsty cry against cisgender control works as an evolution of grunge. Kurt Cobain would be proud.

Brian Capitao is a freelance writer and editor of https://deepfreezechillin.com. He has a passion for hip hop and hosts a podcast in Toronto called The Freeze, your weekly dose of hip hop chatter.
RELATED ARTICLES
album reviewalbum reviewsdark smith
8.0