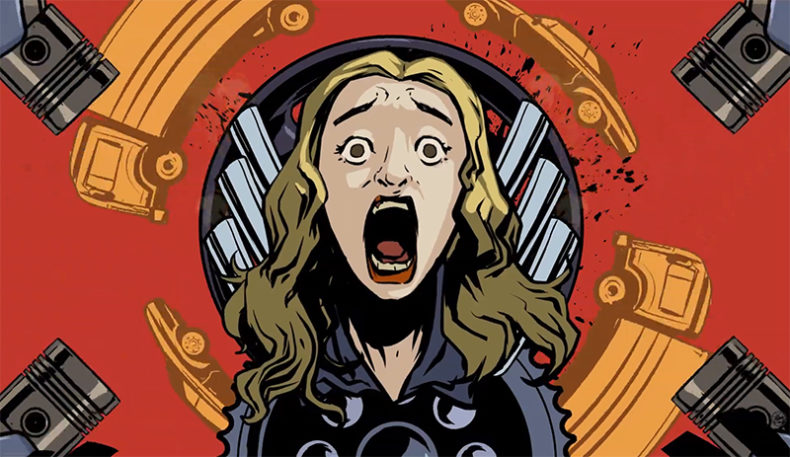 Los Angeles based blues-punk outfit Dante HH is back with another dose of their signature rebellious creativity. The single, “Arcane XIII” is a high energy, catchy track which combines the sounds of hard rock, rockabilly, and blues to get your feet dancing and your friends singing along. Dante HH masterfully blends the upbeat vibe of bands such as Turbonegro with a touch of LA rock and blues guitar.

The band releases the single alongside a creepy and mind bending animated music video, created by Juan Calle of Liberum Donnum. The collaboration between the band and the animator has birthed this freakish and hypnotizing concept. Featuring characters and monsters from previous music videos of Dante HH, hellhounds, grim reapers and many more ghoulish creatures make an appearance in the ominous yet psychedelic video. The dark, old-school-video-game like characters swirl hyperactively across the screen, matching the fast pace of the track.

The Colombian, now LA-based band, is currently formed by Kami Rayne on vocals, Alexx Black on rhythm guitar, Gonzo on lead guitar, Andy Summers III on drums, and Keisuke Motoki on upright bass. The outfit has become notorious since their inception for their signature sound; hard rock meets rockabilly sensibilities with a punk abandon. Made obvious from this latest music video, the band has also become well known for their use of comics, writing and many other mediums of artistic expression to communicate their message: Art is Magic, Magic is Art.

“Arcane XIII” is the latest track to be released from their sophomore album Gunblade Blues Vol.II. The band has been releasing individual tracks from the LP over the last year, breaking away from the traditional schedule of releases for albums that the industry usually adopts. They are currently half-way through a California tour, and will be at the below venues.