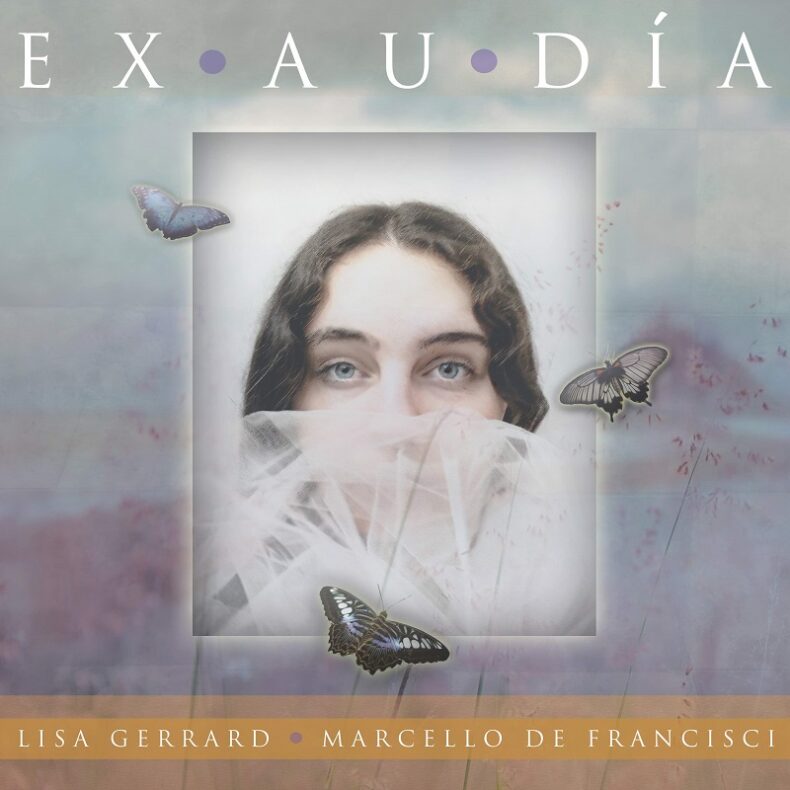 Whenever there is mention of a new release involving the one and only Lisa Gerrard, perhaps best known as frontwoman of 4AD legends Dead Can Dance but also a successful composer and solo artist in her own right, there is never a doubt that this music will sound mystical and totally wondrous. Now the sonic goddess has teamed up with LA-based composer/ record producer Marcello De Francisci.

As chance would have it, today we have the pleasure of premiering not only their profoundly beautiful new album Exaudia, but also their new video for the title track, created by De Francisci himself. While the visuals here complement the music quite well, engaging the mind’s eye and underlining the universality of beauty of this music, which can touch people anywhere. But the music itself is the strongest element we’d like to draw your attention to.

What can we say? This is indeed timeless music. Here, Gerrard demonstrates a maturity and conveys a playful expression in parts and, in others, the deepest reflection, which seems to emanate from or emerge in response to the stunning soundscape that De Francisci has created. With both creators fully in their element and their sites quite lofty with this album, Exaudia presents a match made in heaven, so to speak.

To date, the duo have offered two tasters from this album – the atmospheric ambient track ‘When The Light Of Morning Comes’, released in July, and the gorgeous tapestry of ‘Until We Meet Again’, released in June. Each is accompanied by a euphoric and cinematic new video, adding powerful imagery to these gorgeous compositions.

‘Exaudia’ is the term used when a monarch grants a citizen of his kingdom an audience and, as a result, consents to a wish. A fitting title considering how regal this recording is. Working alongside a team of other musicians including Bahar Shah, Astrid Williamson, Daniela Arbizzi and Farhad Behroozi, ‘Exaudia’ combines the encompassing and euphoric textures of De Francisci’s production with Gerrard’s evocative and haunting vocals. A feminine embodiment of poetic expression, the record plays majestically with this narrative, inviting a rich and vivid texture within each offering.

This full-length album captures the broad and ethereal majesty of their work together, highlighting a rich and soaring tone and conveying the bold and orchestral inspiration that has been tethered to their new studio album since its conception.

“I met Marcello while I was composing for a film called ‘Kings’. He had wonderful engineering skills and I liked him as a person. After a while, we decided to try composing together and went on to compose some film scores. This work was borne out of a desire to write something together during Covid, there is also the artistic desire to embrace the opportunity to unlock our unfulfilled visions. The album is very physical in its construction and sensibility, it is a deeply sensual work that enjoys a sense of empowered subtlety,” says Lisa Gerrard.

Regarding his own inspiration behind this record, Marcello De Francisci notes, “For quite some time, I had been playing around with the idea of composing a brand new track to Lisa Gerrard’s vocals on ‘Diary for the Fallen’. I wanted a darker and more brooding version, which could be attributed to Hans Zimmer’s ‘Time’ from the ‘Inception’ soundtrack without plagiarising his work. I wondered what it would have sounded like if Lisa Gerrard had sung on something of this nature, in addition pushing the envelope even further by writing an aria towards the end of this piece including orchestra, choirs and percussion, which would result in one grand finale. It had to be something completely our own”.

Lisa Gerrard has established herself as one of the world’s most highly acclaimed film composers, winning a Golden Globe for her work on the score for Gladiator with Hans Zimmer. Her film work also includes Whale Rider, which received an Academy Award nomination, and Balib’, which won the Screen Music Award for Best Feature Film Score. In 2018, she received a Grammy nomination for Hiraeth, alongside David Kuckhermann, and went on to become a featured vocalist on the score for Dune before returning to Dead Can Dance to release Dionysus and tour in 2022. Gerrard also performs as part of the Gladiator Live concerts and The World of Hans Zimmer tours.

De Francisci began his career as a visual artist while attending fine arts at an institution founded by the famed Baroque painter Bartolome Esteban Murillo in Seville, Spain. He furthered his education at the Universidad Complutense in Madrid. In 2006, he won the Best Soundtrack of the Year G.A.N.G. Award for his work on Sony Computer Entertainment’s God of War game. He soon partnered with Lisa Gerrard, launching their trajectory of collaborating and co-writing motion picture soundtrack scores together.

As of August 26, the Exaudia album will be released everywhere digitally via Atlantic Curve, a London-based label subsidiary of Schubert Music Europe GmbH and made available via Spotify, Apple Music, as well as other platforms. It can be ordered HERE

Also enjoy the videos for the first two singles from this album: