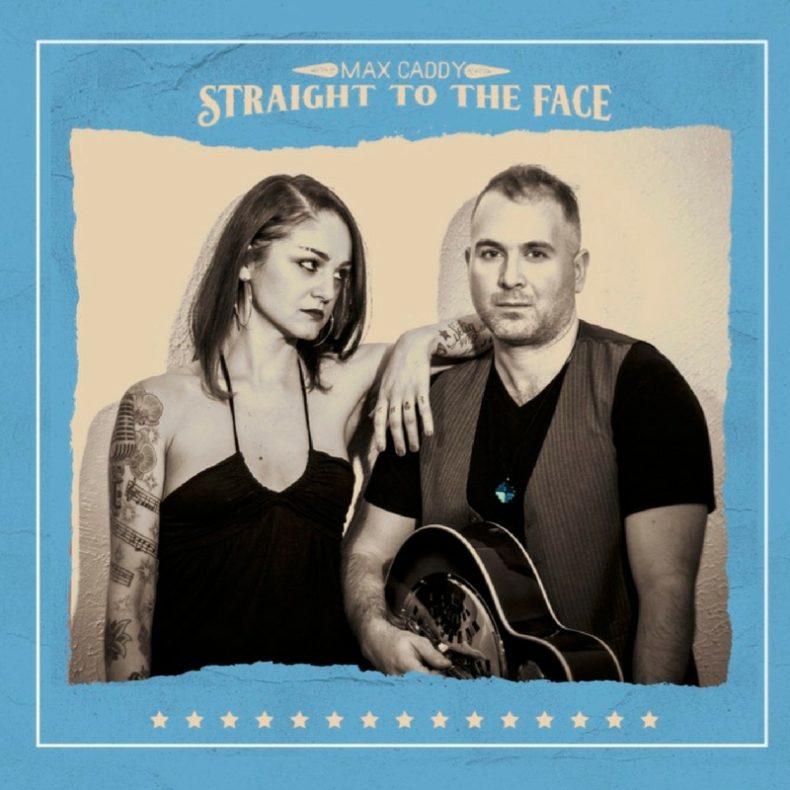 MAX CADDY – STRAIGHT TO THE FACE

Brooklyn acoustic blues/americana duo, Max Caddy announce the release of their new  new EP, Straight to the Face, due out June 1, 2018.  The EP was recorded by Mike Kutchman (Eddie Vedder, Bush Tetras) at Kutch-1 Recoding Studios in Brooklyn and is a snapshot of all of Max Caddy’s sonic strengths. The project’s lead single “Hear Me Out” features Liquor Radio’s Coralie Colmez on fiddle and session drummer extraordinaire Alex Cohen. The recorded guest instrumentation is a first for Max Caddy as it strives to recapture its collaborative live sound. Each song on the EP represents a different facet of the group’s style but like MC’s live shows the record is tied together by a common stripped down rootsy flavor and themes. The pair have a wide range of performing backgrounds and experiences fusing rhythm blues, soul, and stripped down folk influences with a twist of 90s indie angst.

Comprised of singer Corina Corina and guitarist Jesse O’Neill, Max Caddy formed in 2012 when Corina was serving drinks at O’Neill’s favorite bar. They immediately discovered a shared love for writing and creating soulful acoustic music. For two and a half decades O’Neill has been finding his own voice on the guitar through a variety of projects and styles and as a solo R&B artist, Corina Corina has gained recognition within the national independent hip-hop circuit for the past seven years.

When the two met they inspired one another to return to their respective roots of playing folk and blues music on acoustic guitar. O’Neill’s burgeoning singer-songwriter skills were a compliment to Corina’s abilities as a frontwoman, and the chemistry between them quickly compelled Max Caddy to dive head first into the New York music scene. Soon the band established a loyal following, a weekly residency in Williamsburg, “Max Caddy and Friends,” an EP, regional tour dates and a southern tour ending at SXSW. After a two year hiatus of working on solo projects, the pair revived in 2017 with the release of the single “Bottle’s Been Bringing Me Down” and a three-month residency at the legendary East Village venue, Sidewalk Cafe.

Jesse O’Neill released his debut solo acoustic EP, Sleepwalking Sessions in 2014, followed by the full-length Talkin’ Paradox Blues  in 2015. O’Neill designed ’Blues’ to showcase his amplified musical persona, and the album also includes an acoustic Max Caddy song “You Can Lead.” O’Neill toured throughout the country and internationally to promote the releases. He drew on the success of those projects to conceptualize the recording of Straight to the Face, which he produced.

Corina Corina has been featured on tastemaker blogs like PRIDE, Bitch Media, The Vinyl District and Singersroom, among others, and shared stages with heavyweights Talib Kweli and Action Bronson, in addition to touring extensively through the USA, including multiple showcases at South by Southwest in Austin and North by Northwest in Toronto.  In early 2017, Corina Corina released a mixtape tribute to Run the Jewels entitled Run the Blues to critical acclaim. Both of her self-released solo albums, The Eargasm(2012), The Free Way (2014), which were co-produced with Willie Green (backwoodz), and for Hangover Music she teams up with him once again. Her albums incorporate social issues from gender inequality to self-love and resisting social norms.

“To me, this project represents a sonic snapshot of Max Caddy’s past, present and future. We’ve been writing a lot lately and chose to record these five songs as a great representation of our strengths. There’s something for everyone – music inspired by blues, pop and indie rock and more sophisticated layers of instrumentation that we’ve done in the past — but it’s all distinctly  Max Caddy. And it wouldn’t be a Max Caddy project without directly paying tribute to one of our heres — in this case the Fab Four. The record flows and is a great introduction to our band,” says O’Neill.

SPILL NEW MUSIC strives to keep our readers up-to-date with new releases by your favourite artists, keeping you informed of new album, single, and video releases. Stay tuned -- who knows, you might just discover your new favourite band.
RELATED ARTICLES
album premiereep premierehear me out