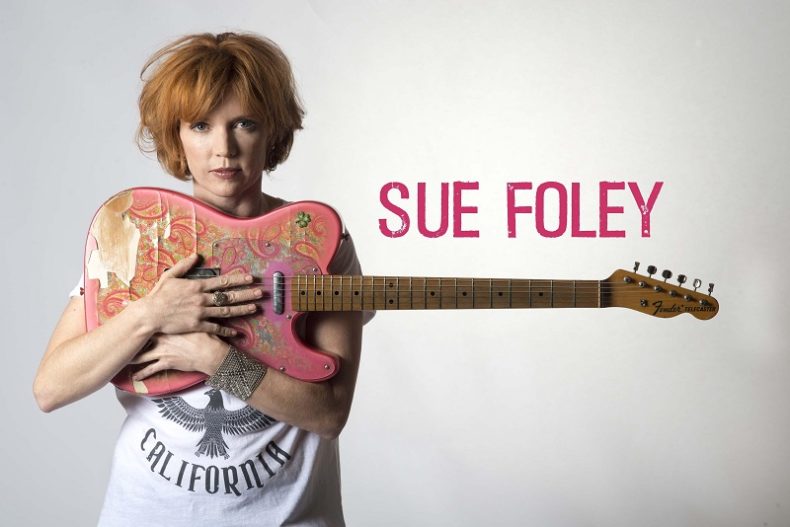 
Sue Foley is a multi-award winning musician and of the one of the finest blues and roots artists working today. Foley spent her early childhood in Canada, mesmerized by her father’s guitar and started her professional career at sixteen. By twenty-one, Foley was living in Austin, TX and recording for Antone’s—the esteemed blues label and historic nightclub that helped launch the career of Stevie Ray Vaughan. Her first release, Young Girl Blues, quickly rooted her unique talents as a proficient blues guitarist, inspired songwriter and captivating vocalist. Foley has toured steadily with her band, toting her signature pink paisley Fender Telecaster—working and sharing the stage with greats such as BB King, Buddy Guy, Lucinda Williams and Tom Petty. In 2001, she won the prestigious Juno Award (Canadian equivalent of the Grammy) for her CD, Love Coming Down. Foley also holds the record for the most Maple Blues Awards (seventeen) and has earned three Trophées de Blues de France. She has also garnered several nominations at the International Blues Music Awards in Memphis, TN.

As an offshoot to her professional recording and touring career, Foley started a project called Guitar Woman based around dozens of interviews she conducted with the world’s leading female guitarists. From 2001-2008, she wrote articles, organized and promoted concerts, and worked on a book—fueling her passion for gender studies in music and her desire to bring the work of great women guitar players to light. The Guitar Woman project entered a period of dormancy from 2009-2015 while Foley pursued several musical collaborations and returned to university to get her graduate’s degree. Plans are in the works to finish Guitar Woman in the coming months.

2016 brought Foley full circle when she returned to Austin, TX and started collaborating with some of her old friends and many Texas musical legends including Jimmie Vaughan and Billy Gibbons (ZZ Top). Foley is the only female member of the famed “Jungle Show” which features Gibbons, Vaughan, B3 virtuoso Mike Flanigin and Chris ‘Whipper’ Layton (formerly of Steve Ray Vaughan and Double Trouble). “The Jungle Show” was one of the hottest tickets in Austin in 2016. After playing two sold out shows at Austin City Limits Live 3TEN Club in December, Foley entered the studio with her Texan pals and laid down tracks for what will undoubtedly be her best and most successful album to date; The Ice Queen.

SPILL TRACK OF THE DAY is published daily, showcasing the best in recent independent releases, with a focus on the Toronto Indie Music Scene. We also feature tracks from across Canada and around the World, including Canadian francophone releases. Remember -- you heard them here first. ;)
RELATED ARTICLES
austinottawastony plain records