SPILL TRACK OF THE DAY: JUMPIN JACKS – “SHE DOESN’T KNOW” 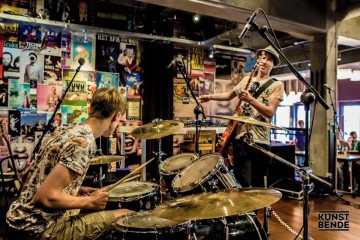 Ever wonder what is happening musically in the Netherlands? It turns out they have a pretty badass, thriving indie music community. As a start, here is one up and coming young indie band – Jumpin’ Jacks. This Dutch duo consists of Thomas Mastwijk on stix, and Lex van den Dobbelsteen on vox and guitar — and that’s all they need to kick some serious ass.

Just goes to show you — music has no language, it IS a language. Enjoy!

Trish Melanson lives in the Toronto area with her three boys, Nicholas, Justin, and Eric, her dog Jakkson, and her cats Max and Jagger. She is the former host and producer of Canadian Kickass, a weekly two hour radio show on New Jersey's Chestnut Radio, showcasing Canadian Music. She is also a former Web Content Manager of Indie Soundscapes, an online showcase for Independent Music Artists Worldwide, and was a regular music contributor to The Stroumboulopouli. She is a fervent supporter of the Toronto live music scene. In a past life she was a teacher and Vice Principal in Durham Region. She has many more new and exciting projects waiting in the wings. ;)
RELATED ARTICLES
indie musicnetherlandstrack of the day
7.0

by King Dawit on March 24, 2019
London Stone Just How High Independent “Just need those dancing shoes.” The London Stone cries these five words, as the drums bash away, the crunchy guitar riff repeats, and the [...]