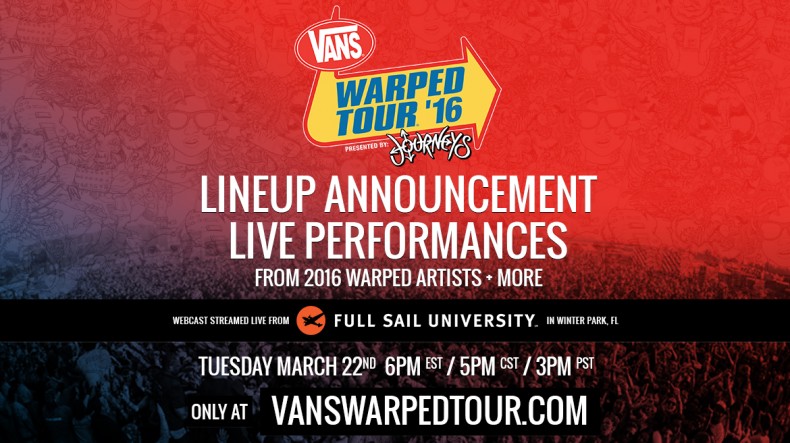 2016 VANS WARPED TOUR®, PRESENTED BY JOURNEYS® LINEUP TO BE REVEALED VIA LIVE WEBCAST FROM CAMPUS OF FULL SAIL UNIVERSITY ON MARCH 22 AT 6PM EST

Event To Feature Live Performances From Selection Of Artists on This Summer’s Tour; Tickets For All Shows On Sale March 22 at 10 am

The entire lineup for 2016’s Vans Warped Tour®, presented by Journeys®, will be unveiled via a LIVE webcast, direct from Full Sail Live, the state-of-the-art performance venue on the campus of Full Sail University in Winter Park, FL on Tuesday, March 22nd at 6pm EST.  In recent years, the Warped lineup has been revealed via weekly announcements leading up to the kickoff of the tour, so 2016 marks the first time in several years that the ENTIRE lineup will be revealed at once, and the first time ever to be streamed from Full Sail University.

The webcast will feature live performances from a selection of artists performing on this summer’s tour. To join the webcast on March 22nd, visit VansWarpedTour.com.

A limited number of free tickets to the announcement event will be made available to the public. Seating is limited, and will be available on a first come, first served basis. If you are in the Central FL area and are interested in learning how to attend the event in person, visit www.FullSailBlog.com/VWT.

Warped Tour founder Kevin Lyman says, “Last year when I visited Full Sail, I was blown away by their facilities. To be able to use them for our artist announcement webcast is a perfect way to start our 2016 partnership.”

“Since 2012, Full Sail’s relationship with the Vans Warped Tour has led to numerous internship opportunities for our graduates in roles ranging from live audio production to content reporters throughout the multi-city concert tour,” said Full Sail University’s VP of Alumni Relations/Event Producer, Jay Noble. “We are honored to host the 2016 Vans Warped Tour Lineup Announcement event on our campus at Full Sail Live, and look forward to more incredible experiences at the Warped Tour this summer.”

Tickets for this year’s tour will go on sale on March 22nd at 10am local time at VansWarpedTour.com. As a bonus for early bird ticket buyers, the first price levels available will be at the lowest of the tour, and in addition will include a Warped 50-song compilation download from SideOne Dummy Records.

The 41-date trek launches in Dallas, TX on June 24 and concludes on August 13 in Portland, OR. See dates below.

Now in its 22nd year, Vans Warped Tour is the largest traveling music festival in the United States, and the longest-running touring music festival in North America. Originally conceived by founder Lyman in 1995 as an eclectic alternative rock festival, with a focus on punk rock, over the years the tour has grown to include a multitude of genres, including metal, hip hop, reggae, pop and more.

Tickets on sale at 10am local time on March 22nd at VansWarpedTour.com

The Vans Warped Tour®, presented by Journeys®, is well known as America’s longest running touring music festival of the summer. Since 1995, the tour has been a showcase for both established and up and coming talent, across a wide range of eclectic sub-genres.

The tour has also cemented its place in history by bringing alternative rock and skate culture from the underground to the forefront of global youth culture, while at the same time helping those in need through non-profit and eco initiatives.

Alternative Press readers voted the Vans Warped Tour as the “Best Tour/Festival” and Rolling Stone called it “America’s Most Successful Festival”. Now in its 22nd year, the 41-date tour will commence June 24 in Dallas, TX and end on August 13 in Portland, OR.

Full Sail University is an award-winning educational leader for those pursuing careers in the entertainment and media industry. Founded in 1979, Full Sail has been recognized as one of the 2015 “Top 25 Graduate & Undergraduate Schools to Study Game Design” by The Princeton Review, one of the Best Music Programs by Rolling Stone Magazine, and one of the Best Film Programs by UNleashed Magazine. Full Sail was named the 2014 “School/College of the Year” by the Florida Association of Postsecondary Schools and Colleges, received the “21st Century Best Practices in Distance Learning Award” from the United States Distance Learning Association, and was recognized as one of the Top 100 Social Media Colleges by Studentadvisor.com.

SPILL NEWS strives to keep our readers up to date with news and events in the music industry. We keep you informed of the most recent information regarding new releases, tour dates, and information items about your favourite artists.
RELATED ARTICLES
newsvans warped tour