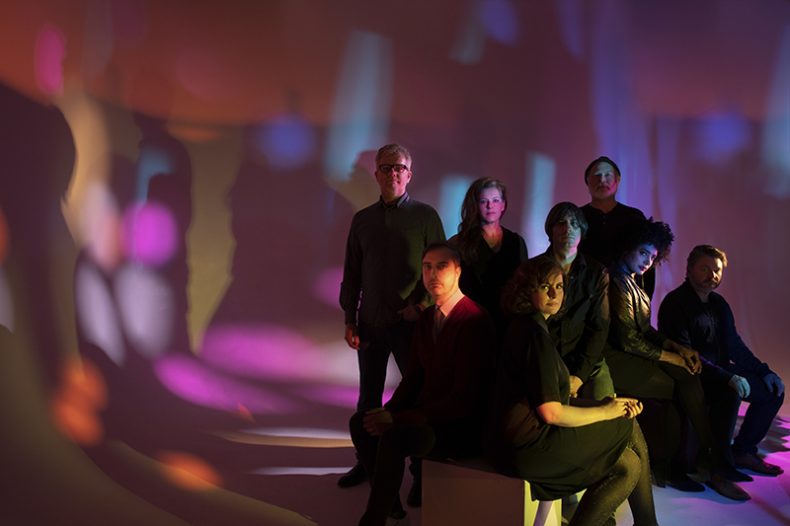 The New Pornographers are set to release a special 7” record for Record Store Day Black Friday on November 29. “Stand-Up” b/w “Fade, Baby, Fade Into the City of Lovers” is due via the band’s own Collected Works Records in partnership with Concord Records. See HERE for a list of participating Record Store Day retailers.

The band recently premiered the Mitchell deQuilettes-directed video for the single “Falling Down The Stairs Of Your Smile”. Upon the album’s announcement, Stereogum raved that the “power-pop all-star team are back in action” while hailing the “long-running power-pop army of melodically gifted mostly-Canadians.” SPIN also praised the track “One Kind of Solomon” as “a chaotic arena-rock number, with heavy drums immediately reminiscent of bands like U2 and Arcade Fire. Soon enough, shimmering guitars and keyboards peak through a wall-of-sound mix mostly composed of multi-tracked drums and vocals.”

“I was about two-thirds of the way through the record when I began to notice that lyrically so much of it was pointing toward car songs,” notes Carl Newman. “The opening track is ‘You’ll Need a Backseat Driver,’ and that was a metaphor that seemed to be running through other songs, too. Next to the love song, I feel like the car song is one of the most iconic kinds of songs in pop music, from Chuck Berry to the present. There was so much of that throughout it that I started thinking: ‘Oh, no, there’s too many references to cars on this record!’ And then I thought, ‘No, that’s good—people might think it’s a concept album.’”

The New Pornographers have previously released seven studio albums including their most recent, 2017’s Whiteout Conditions. The first album released on their own imprint, Collected Works Records, in partnership with Concord Records, the album received widespread acclaim and was hailed as “rich with new wave synths and closely blended harmonies” by Pitchfork, while Rolling Stone praised its “uplifting three to four minute indie-pop numbers, imbued with lush vocals.”

SPILL NEWS strives to keep our readers up to date with news and events in the music industry. We keep you informed of the most recent information regarding new releases, tour dates, and information items about your favourite artists.
RELATED ARTICLES
concord recordsfalling down the stairs of your smilein the morse code of brake lights
9.0

by Aaron Badgley on February 25, 2022
Tears For Fears The Tipping Point Concord Records Roland Orzabal and Curt Smith split after Tears For Fears’ third album, The Seeds Of Love. In the early 2000s Orzabal and Smith [...]

by Gerrod Harris on April 16, 2021
The Offspring Let The Bad Times Roll Concord Records/Universal Music Canada As one of the greatest selling punk band of all time, The Offspring have released their first [...]

by Ryan Sagadore on October 30, 2020
Elvis Costello Hey Clockface Concord Records Over the last 40 plus years, Elvis Costello has produced some of the most influential and varied work known to pop music. His virtuosity [...]