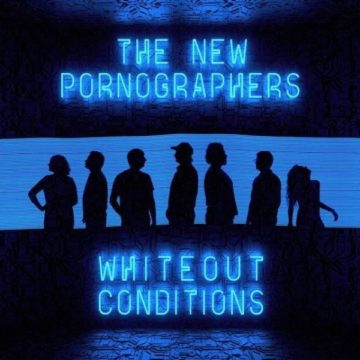 From the first drum beat of “Play Money,” you unmistakably know that you’re listening to the New Pornographers. You are immediately affronted by the distinct sound that these Canadian indie rockers have crafted over the course of seventeen years and six albums.

Whiteout Conditions is the latest effort from the A. C. Newman fronted New Pornographers and with a new album comes a few changes. This is their first album to not feature singer-songwriter Dan Bejar and their first album to feature Joe Seiders as their full-time drummer. With their updated lineup the album’s songwriting was done primarily by Newman. Despite the changes, some signature features remain the same. Neko Case’s vocals still pack a slightly twangy punch especially when aligned alongside Newman and vocalist, instrumentalist Kathryn Calder.

In many ways Whiteout Conditions feels like a sensible follow-up to 2014’s Brill Bruisers. It maintains a lot of the same synthesizer backed power pop styling all the while advancing with increasingly complex syncopated and nearly danceable rhythms. Some songs have pleasant surprises, the use of mallets and percussion on “Colosseums” and the choir-like opening chorus of “We’ve Been Here Before” show that the New Pornographers are still playing with new styles well into their careers.

Newman’s songwriting on Whiteout Conditions is quite reminiscent of both his prior work with the New Pornographers and his recent solo material. Some songs dig deep and hit arguably depressing places. As Newman has stated, the title track is “essentially a song about depression. Going through a dark time and it takes you over and you’re trying to escape it.”

To herald the release of Whiteout Conditions, the New Pornographers released a trio of singles and a couple videos. Among their teasing items were the bizarrely fascinating interactive lyric video for “High Ticket Attractions” and a destructively beautiful Dan Huiting directed music video for the same track. These artistic endeavors immediately frenzied fans and set the tone nicely for the forthcoming album.

At the end of Whiteout Condition‘s forty-two minute runtime “Avalanche Alley” abruptly ends leaving a longing for more from this great Canadian indie supergroup. Whiteout Conditions is unapologetically New Pornographers, between their crunchy distorted guitars and ambient synthesizers remains a power pop sound that has powered on since the turn of the 21st century.

I am an Edmonton based musicophile and photographer who loves experiencing music whether it's live or on my turntable. I play seven instruments and go to a lot of concerts.
RELATED ARTICLES
album reviewsdine alone recordsthe new pornographers
9.0