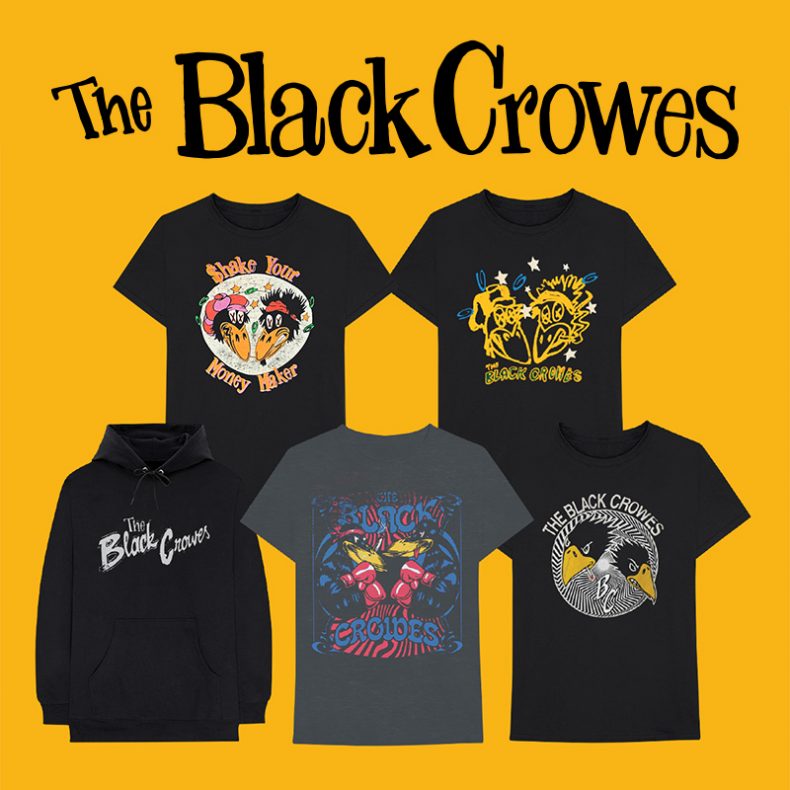 The Black Crowes and Bravado, Universal Music Group’s leading global consumer, lifestyle and brand management company, are pleased to announce the launch of their first e-commerce merchandise shop in almost 10 years. The iconic rock band, whose quintuple platinum debut album, Shake Your Money Maker, was released 30 years ago this year, have since released eight studio albums, four live albums and have sold over 35 million records.

The new site is set to launch with an assortment of new and classic designs from the band’s storied history, which will be exclusive to the store and only available at https://shop.theblackcrowes.com. After parting ways in 2013, rockstar brothers Chris and Rich Robinson shocked fans and rock journalists alike by publicizing their reunion late last year on the Howard Stern Show. Announcing a brand-new North American tour, which has since been rescheduled to Summer 2021 due to the global pandemic, The Black Crowes will present Shake Your Money Maker played in its entirety plus all the hits.

About The Black Crowes

In 1990, when journalists were lamenting the death of rock, as cheesy pop and hair metal dominated the charts, Atlanta’s Black Crowes gave the genre a swift and much needed kick in the ass with Shake Your Money Maker. Fueled by singles “Jealous Again,” “Twice As Hard,” “She Talks To Angels,” and the break-through cover of Otis Redding’s “Hard To Handle,” the band immediately took the rock world by storm, topping Rolling Stone’s “Best New American Band Readers Poll” in late 1990.  The Black Crowes went on to release eight studio and four live albums, selling in the tens of millions along the way; they sold out shows around the world; had legendary guitarist Jimmy Page join as a member; got kicked off a tour with ZZ Top for insulting the sponsor; got screwed by bad record deals; got married and divorced, fought amongst themselves and against the rest of the world. In other words, they’ve done everything a legendary rock group should do.

Bravado is the leading global provider of consumer, lifestyle and branding services to recording artists and entertainment brands around the world. Part of Universal Music Group, the leader in music-based entertainment, Bravado represents artists in more than 40 countries and provides services including sales, licensing, branding, marketing and e-commerce. Their extensive global distribution network gives artists and brands the opportunity to create deeper connections with their fans through apparel, consumer packaged goods and unique experiences. For more information: http://www.bravado.com

SPILL NEWS strives to keep our readers up to date with news and events in the music industry. We keep you informed of the most recent information regarding new releases, tour dates, and information items about your favourite artists.
RELATED ARTICLES
chris robinsonnewsrich robinson
8.0

by Gerrod Harris on May 4, 2022
The Black Crowes 1972 Amazon Music For their first collection of new, recorded material, the recently reunited Black Crowes have partnered exclusively with Amazon Music to deliver 1972. The [...]

by SPILL NEWS on July 12, 2021
THE BLACK CROWES PARTNER WITH THE CODA COLLECTION TO RELEASE [...]