1
new
SPILL VIDEO PREMIERE: TEARING UP – “SAID SOMETHING”
Album Reviews
429
previous article
SPILL NEW MUSIC: SILVERSTEIN RELEASE NEW SINGLE/VIDEO "LIVE LIKE THIS" FEATURING nothing,nowhere. | NEW ALBUM 'MISERY MADE ME' OUT ON MAY 6 VIA UNFD/NSEW RECORDINGS
next article
SPILL FEATURE: WAKING UP INTO THE NEW HORIZON - A CONVERSATION WITH ALICE COHEN 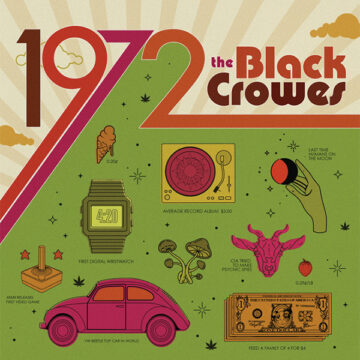 For their first collection of new, recorded material, the recently reunited Black Crowes have partnered exclusively with Amazon Music to deliver 1972. The six-track covers EP sees The Black Crowes take on The Rolling Stones, Bowie, and more in celebration of 50 years of one of one of the greatest eras of rock, by performing a collection of timeless songs. While available digitally only through Amazon Music, a full physical launch of the record has since been released on May 6 via the band’s own Silver Arrow Records.

Opening with The Rolling Stones’ deep cut, “Rocks Off”, the opening track from their acclaimed album, Exile On Main Street, The Black Crowes have returned in fine form. It is a faithful cover full of blues rock energy that they are known for, so much so that, if you did not know this was a cover, you could easily assume it was a new original. In this regard, this rendition is as fresh as the original as the Robinson brothers’ performance is full of an effortlessly cool attitude. This is immediately followed by the hard blues of T. Rex’s “The Slider”, a song accented by Zeppelin-esque vocals from

Chris Robinson and crisp and crunching guitar tones from Rich Robinson. Bringing the first half of the EP to a close, the Crowes take on “You Wear It Well”, originally by Rod Stewart.

The second half kicks off with the Rich Robinson-led cover of Little Feat’s “Easy To Slip”, another largely acoustic track that adds a level of variety to the album. Perhaps the strongest cover on 1972 however, is David Bowie’s “Moonage Daydream”, a hard-hitting blues rocker with a touch of remaining psychedelia, with Chris Robinson delivering an incredibly strong vocal performance. 1972 comes to a close with “Papa Was A Rolling Stone”, by The Temptations. The funky and moody cover,

while faithful to the original, shines a different side to The Black Crowes, one that has always been present, but is often outshined by their blues rock tone. Collectively, “Rocks Off”, “Moonage Daydream”, and “Papa Was A Rolling Stone” are the best offerings across 1972, each capturing The Black Crowes performing on all cylinders.

While fans are eagerly waiting for a studio record of new original material from The Black Crowes – especially considering the unlikely nature of their reunion – 1972 satisfies this need to a certain degree. Yes, it is new, and it is certainly The Black Crowes, however a covers EP feels like a half step

forward for the band. That is no slight to the performances and adaptations on 1972; the album itself is a strong celebration of classic rock, allowing for The Black Crowes to pay homage and flex their influences in a studio setting. Ultimately, while it may not be the record everyone was hoping for, it still makes for an exciting listening experience.

A passion for music has always been a part of Gerrod’s life. As a young boy, he was raised on a steady diet of the music from The Chili Peppers, Aerosmith, The Stones, Prince, and others from his mum. Raised in the GTA, Gerrod continued to foster his love for music by attending a wide range of concerts and learning the drums. His unapologetic passion for music has no bounds and has spread to a wide variety of styles, whether it be the 90’s rock that sound tracked his teenage years, the jazz he studied in university, or his newfound love for hip-hop. He recently received his bachelors in music and education from York University and is passionate about writing and reviewing good (and less than good) music. Gerrod is also the drummer and songwriter for a Toronto based rock & roll band, One In The Chamber.
RELATED ARTICLES
album reviewalbum reviewsamazon music
10