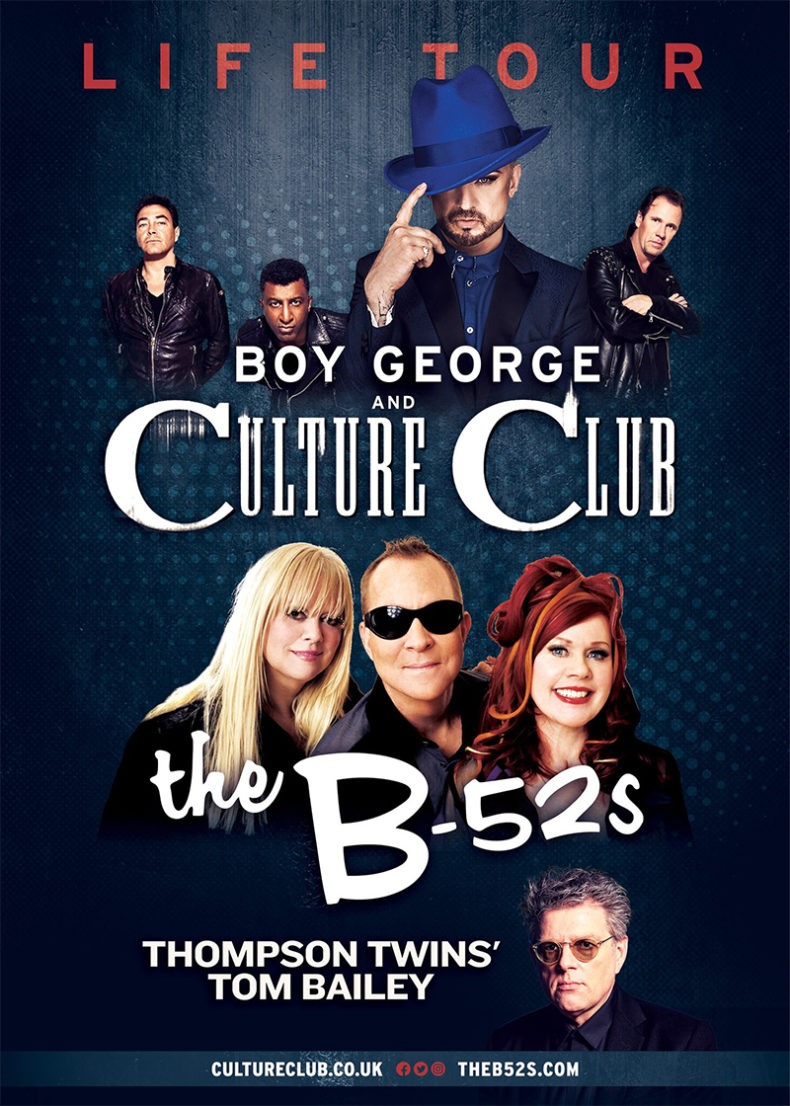 Now over 20 million albums into their career, there can be no doubt as to why The B-52s remain one of rock music’s most beloved and enduring bands. As The B-52s gear up to celebrate their 40th Anniversary, what better way to celebrate then hitting the road with Grammy Award winning legends Boy George and Culture Club for a major 2018 U.S. summer tour. The Life Tour: starring Boy George & Culture Club and The B-52s, will visit 40+ cities across the U.S. kicking off June 29 in St. Augustine, FL going thru October 3rd. Tickets are on sale now! Click HERE to purchase.

Today, The B-52s announce they will be offering a VIP Preshow Party Mix Package. Come join the band for a 40th anniversary toast pre-show and meet and greet. Packages are limited, so don’t miss this once in a lifetime opportunity to hang with the band! VIP packages are on-sale now, please click HERE to purchase.

The B-52s will also be playing solo dates beginning May 27th. These dates kick off in Cincinnati, OH at Taste of Cincinnati and go through June 10th. Listing of the full tour dates below!

It is well known that the B-52s are The World’s Greatest Party Band. Nearly 40 years and over 20 million albums into their career, there can be no doubt as to why they remain one of rock music’s most beloved and enduring bands. Any mystery concerning the band’s longevity and ongoing appeal is immediately solved when exposed to a B-52s concert experience. From groundbreaking songs like “Rock Lobster,” “Dance This Mess Around,” “Private Idaho,” “Roam” and “Deadbeat Club” to chart-topping hits like “Love Shack,” to their thrilling reemergence on the pop scene with their 2008 CD Funplex, which bowed at #11 on the Top 200. The B-52s’ unforgettable dance-rock tunes start a party every time their music begins.

Formed on an October night in 1976 following drinks at an Athens, GA, Chinese restaurant, the band played their first gig at a friend’s house on Valentine’s Day 1977. Naming themselves after Southern slang for exaggerated ‘bouffant’ hairdos, the newly-christened B-52s (Fred Schneider, Kate Pierson, Keith Strickland, Cindy Wilson and Ricky Wilson) began weekend road trips to New York City for gigs at CBGB’s and a handful of other venues. Before long, their thrift store aesthetic and genre-defying songs were the talk of the post-punk underground. A record deal soon followed and their self-titled debut disc, produced by Chris Blackwell, sold more than 500,000 copies on the strength of their first singles, the garage rock party classic “Rock Lobster,” and “52 Girls.” The album placed at #152 on Rolling Stone’s “500 Greatest Albums of All Time” and #99 on VH1’s “Greatest Albums of All Time.” The B-52s began to attract fans far beyond the punk clubs of the Lower East Side — galvanizing the pop world with their ‘stream-of-consciousness’ approach to songwriting and outrageous performance. They had clearly tapped into a growing audience for new music that was much larger than anyone could have anticipated.

1989’s watershed Cosmic Thing elevated them to another galaxy altogether. It moved 5 million-plus units and spawned a string of Top 10 smashes in the form of GRAMMY®-nominated “Roam” and “Love Shack”—which Rolling Stone lauded as “Single of the Year” and also #246 on the “500 Greatest Songs of All Time.” “Love Shack” also earned the MTV Moonman that year for “Best Group Video.” Their marathon tour in support of the record would be highlighted by an Earth Day gig at Central Park for 750,000 fans.

As they take their party-music revolution into the 21st century, the B-52s show no signs of slowing down, serving up their own unique blend of music and showmanship to millions of fans around the world.

Note: All dates and venues subject to change. The lineup will feature Boy George & Culture Club and Thompson Twins’ Tom Bailey for all dates unless otherwise noted below:

SPILL NEWS strives to keep our readers up to date with news and events in the music industry. We keep you informed of the most recent information regarding new releases, tour dates, and information items about your favourite artists.
RELATED ARTICLES
b-52sboy georgeculture club