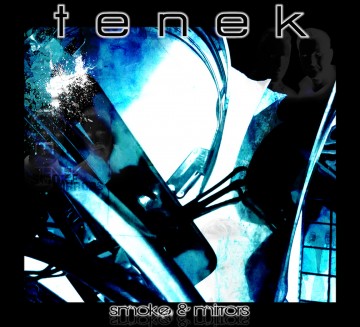 Pre-Orders available as CD format at the band’s online shop or BandCamp from Friday 16th of November. (*Friday 8th January 2016 available from ALL popular online stores).

Three years in the making, ‘Smoke and Mirrors’ showcases bigger and bolder sounds that have been building from the tenek studio. Each track having a common theme throughout, “Things are not what they seem…” – tenek. This album was designed to offer a variety for both listening audiences (live or on-air), as well as for global sync licensing opportunities. Taking things to a new level, the band enlisted the talents of additional musicians such as: Paul Jackson (bass player from the well-known 80’s British pop band T’Pau), Australian-based Sam Morrison (bass), Michael Steer (bass) and newly added band member Steve Clark (drums/vocals). Since tenek’s second album (‘On The Wire’ – 2010) the 2 recently released EPs (‘Another Day’ and ‘What Kind of Friend?’) were successful tests of the the new direction the band has been taking their music.

Since the Devon/Essex tenek debuted in 2007, the electronica duo (aka Geoff Pinckney and Peter Steer) has toured two well-received albums and 9 singles/EP’s. tenek are all about hard grinding electro grooves, a power house of classic British synthesizer pop and stabs of driving guitar and percussion to bring in a slice of rock edge. Producing a unique crossover which is credible and satisfying to both the cult electro scene while retaining a mass market appeal through the their melodies and hooks.

SPILL NEWS strives to keep our readers up to date with news and events in the music industry. We keep you informed of the most recent information regarding new releases, tour dates, and information items about your favourite artists.
RELATED ARTICLES
newstenek