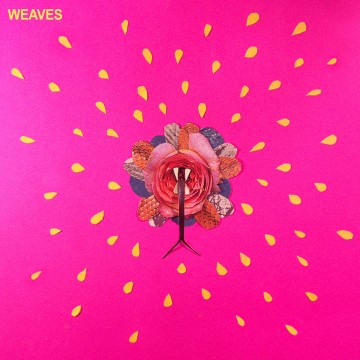 It’s clear upon the first listen of their self-titled EP that Weaves have carved a compelling sound that can’t be easily pinned down.

The brainchild of actor/producer/musician Morgan Waters and former Rat Tail vocalist Jasmyn Burke (with Zach Bines on bass and Spencer Cole on drums), their collaboration results in a mishmash of bouncy, electric-guitar fused dancing tunes with a ‘60s sensibility, all threaded together with the strong, heady vocals of Jasmyn Burke.

Their story reads like a modern day indie music fairy tale: after they met totally by chance, Burke and Waters exchanged cellphone music demos and realized they completed one another musically. Merging Waters’ background in pop with Burke’s talent for experimental sound and adding the fantastic rhythmic duo of Bines and Cole to the mix, Weaves has conceived a unique brand of arty, weirdo rock that they are now performing at shows, happily ever after.

They have pretty solid support behind the scenes as well. David Newfeld, who also has producing credits on albums for local indie music darlings Broken Social Scene and Los Campesinos!, produced two of their tracks, “Closer” and “Buttercup”.

Although their sound comes on really strong, absorbing it in small doses results in a sensuously satisfying high. Super-charged, sexy songs like “Buttercup” and “Motorcycle” will get you shaking your rump, while the more explosive “Take a Dip” gives you permission to let your hair down and headbang. On the other end of the album’s spectrum are the arty and weird “Hulahoop”, the more delicate and sweetly melodic “Do You See Past” and the more accessible and rockin’ “Closer”.

Their ability to morph from song to song is probably the most intriguing thing about Weaves. In a recent “Band to Watch” profile with Rolling Stone, Burke explained that they are seeking to make something different and don’t want to be a part of one specific scene. One look at their vibrant album cover design or at their surreal, cartoonish videos and it’s apparent this band can’t be boxed in. The list of shows they have played at are eclectic as well. Small fry outdoor fests like Empty Fest and the TO-based Wavelength concert series have included them on their lineup, but they have also graced the stage at big-time fests like SXSW and will be featured at the upcoming NXNE fest.

Although I haven’t had the privilege to see them live, I would bet this is a far-out sound to experience at a festival. If you lack the funds for a festival ticket, you should listen to this EP outside in your backyard high or while working on your next art project.

But be wary: the more you listen, the more habit forming this EP really is. And if you are in need of another hit, you’ll be happy to know the band’s upcoming debut LP will be out soon. Indeed, it will be interesting to see what they cook up next

Native Quebecer and freelance writer Andrea Paré first began using music as a drug in her teen years to escape the drab experience of growing up in the suburbs. Now as a full grown adult and living in Toronto, she has a healthier addiction to discovering new musical artists and watching as much live and local music in her adopted city as she can.
RELATED ARTICLES
album reviewsweaves
7.0