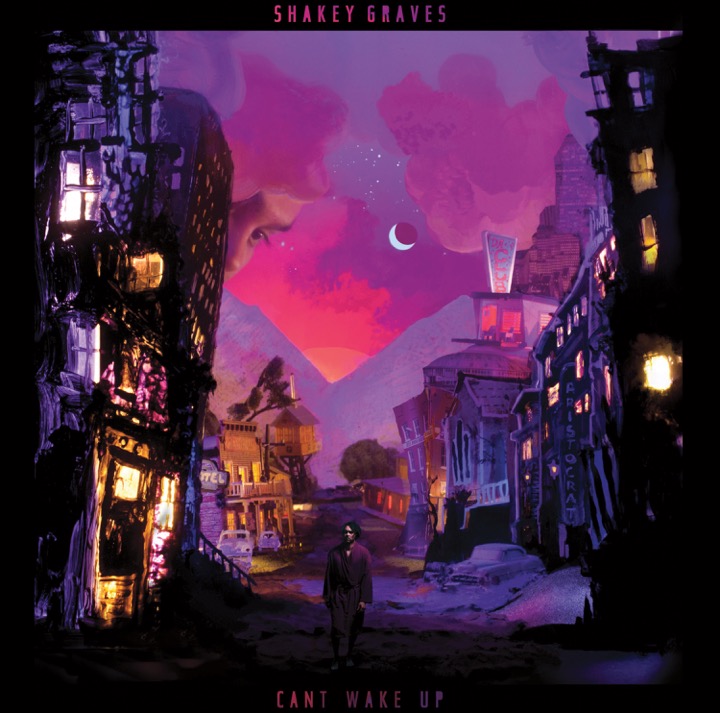 Shakey Graves, who in December 2017 teased the oncoming of new music via Twitter, has officially announced the new studio album Can’t Wake Up, is due out May 4th on Dualtone records. In evolution from his 2014 release And The War Came, and receiving the award for Best Emerging Artist at the 2015 Americana Music Awards, this new album harnesses a revelatory sound that ascends to new genres for the artist.

“This record is the most I’ve ever intentionally worked on a project, musically speaking, in terms of the scope of it and how much thought went into it,” shares Alejandro Rose-Garcia aka Shakey Graves. “It’s a dense album; there’s a lot of information going on.”

Thirteen new songs venture through reflections and life lessons learned from personal experiences dating as far back as high school. “The beautiful lesson of all this is having to trust yourself, to be willing to start something that you don’t know the outcome of,” he reflects. “Or to lean toward something just because it feels right, even though it may not be what you originally put down on paper. Those are the kind of stories in this record. They’re not so much about specific people, or even myself per se. They’re different shades of every person’s life.”

In addition to the album, Shakey Graves will be heading out on tour in May, including two theatre plays in Canada, Massey Hall on May 19 and the Corona Theatre in Montreal on May 20 and hits major U.S.venues in Boston, D.C., Brooklyn, Detroit, Chicago, and a headlining show at Red Rocks Amphitheatre in Morrison (Denver, CO). A full list of dates follows below.

SPILL NEWS strives to keep our readers up to date with news and events in the music industry. We keep you informed of the most recent information regarding new releases, tour dates, and information items about your favourite artists.
RELATED ARTICLES
dualtone recordsmassey hallnews
10

by Andre Skinner on August 14, 2020
Kathleen Edwards Total Freedom Dualtone Records With her first release in over eight years, Ottawa singer-songwriter Kathleen Edwards has returned with musical tales about her [...]
8.0

by Ryan Sagadore on June 9, 2017
Chuck Berry Chuck Dualtone Records Anyone who picks up an electric guitar and plays power chords, whether they know it or not, are saluting the original rock guitar hero, Chuck Berry. The [...]