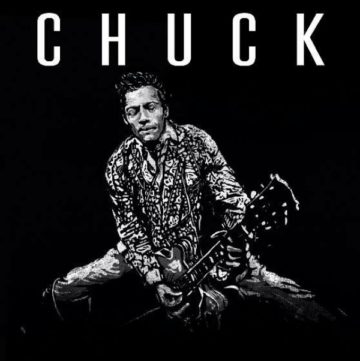 Anyone who picks up an electric guitar and plays power chords, whether they know it or not, are saluting the original rock guitar hero, Chuck Berry. The twelve-year-old plugging away in his room may think he’s emulating the Ramones but the ideology hails from someone else.

Now over 60 years since pioneering his chunky double-stops they have since become standard in the rock and roll lexicon. Everyone from Keith Richards to Angus Young has taken a colour from the Chuck’s pallet.  And despite these brilliant axemen’s take on their heroes’ style, no one really plays it like Chuck.

Nearly three months since his death at age 90, Dualtone Records has released his final album titled simply, Chuck. The album, his first since 1979, features Berry shredding his old R&B licks over entirely new compositions. While many of these riffs have become rock and roll clichés, it’s refreshing to hear the old maestro back on tape on what is clearly his swan song. Berry brings a few younger artists, such as Gary Clark Jr. Tom Morello and Nathaniel Ratecliff to help him bring his 1950s’ sound into the 21st century, the latter two both appearing on “Big Boys”.

On the track  “3/4 Time (Enchiladas)” we can hear dazzling traces of the master’s style as we did six decades ago; raw and energetic and it’s certainly one of the albums high points. Berry’s guitar tone is low-down and gritty a la “Brown Eyed Handsome Man”. His playing, which has expectedly slowed down over the years, but still grooves like a motherfucker.

“She Still Loves You”, an odd one from Berry, is dominated by a steady bass back-beat and heavy piano licks, while Chuck croons in a purposeful unsteady voice. “Jamaica Moon”, a proto-Reggae like tune is another one that stands out from the rest, sounding more like something you’d find on the Dr. No soundtrack than a Chuck Berry LP.

Perhaps the album doesn’t muster up the imaginativeness of “Maybellene” or “Too Much Monkey Business”, but that is impossible to recreate all these years later. What makes Chuck such a charming collection of songs is its nostalgic appeal and knowing that these 10 tracks are the legends’ final compositions.

As a child growing up in the suburbs, Ryan found music as a way to soothe his boredom. After first hearing AC/DC at the age of 10, he was hooked on music. Tracing its roots to the ‘50s, he became obsessed with Elvis, Buddy Holly and Chuck Berry. Somehow that led to grunge, then psych-rock, then jazz, etc. The list goes on and on and his collection of vinyl records continues to grow.
RELATED ARTICLES
album reviewschuckchuck berry
9.0