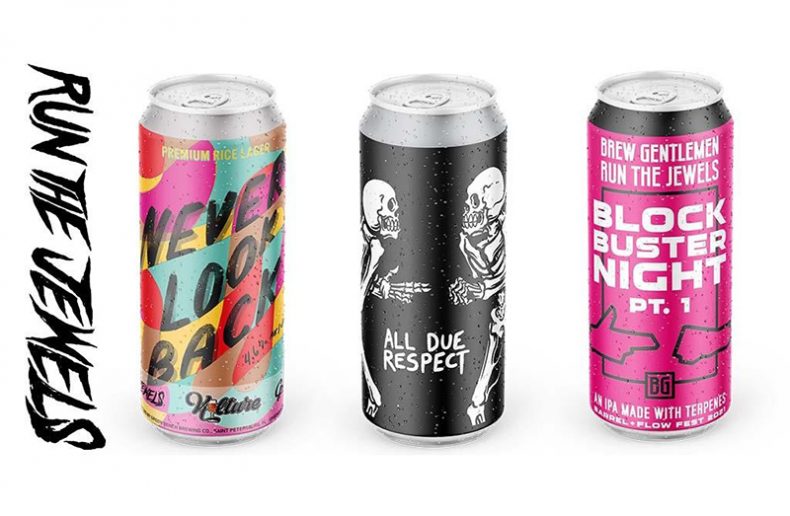 Run The Jewels, the lauded duo of Killer Mike and El-P, have announced plans to once again expand their infiltration of the beverage industry via a new series of collaborative beers slated for Fall of 2021. In an effort to support and expand inclusivity within the craft beer community the duo have partnered with Black-owned craft breweries and events for a distinctive trio of offerings, with some slated to be debuted at festivals celebrating Black brewers and artists. The new line of beers includes the just-released “Never Look Back,” a premium rice lager brewed in collaboration with nonprofit Beer Kulture at Green Bench Brewing Co in Florida, “All Due Respect,” a molasses and corn grits strong ale brewed in collaboration with Proximity Brewing and Spaceway Brewing that will be released at Black Brew Culture’s Blacktoberfest on October 8th in Durham, NC, and “Blockbuster Night, Pt. 1,” a danky IPA with terpenes brewed in collaboration with Brew Gentleman Brewery of Braddock, PA that is set to debut at Barrel and Flow Fest on September 10th and will also be available for sale online, as part of a Barrel and Flow set, at Tavour.com as part of DigiFlow, the virtual coverage of the fest. Putting money back into the communities where these beers were made is an important component for the duo: a portion of all proceeds from “Never Look Back” will benefit Beer Kulture, a nonprofit dedicated to promoting equitable hiring practices in the brewing industry, while a portion of proceeds from the sale of “All Due Respect” will support Blacktoberfest, and 50% of proceeds from “Blockbuster Night, Part 1” will benefit local Pittsburgh charities serving the children and the arts, including Steel City Arts Initiative.

The new slate of beers underscores the continued growth of Run The Jewels’ beverage ambitions, as they chart a course toward producing their first self-released beers in addition to other planned beer, spirit, and coffee collaborations. Among their other impending releases are a new IPA brewed in collaboration with Brooklyn’s Interboro Spirits & Ales (one of the duo’s early brewing collaborators, with whom they made the award-winning “Stay Gold” IPA), and a new collaboration with Cerveza Minerva in Mexico City slated for this November, the Oh Mama Juicy IPA. And for a very new kind of RTJ libation, they’ll soon be dropping The Ground Below, a cold brew coffee made in collaboration with Chicago’s Dark Matter Coffee that will be available at the Dark Matter booth at Riot Fest on September 17th and to be made available for nationwide shipping at www.darkmattercoffee.com. These all follow in the footsteps of their recent hard seltzer collaboration with Chicago’s City Water “Ooh La La” and last year’s ultra ambitious global collaboration “No Save Point” IPA, for which the duo teamed with 13 esteemed breweries from across the world. More info on all the aforementioned can be found at Run The Jewels dedicated beer site.

SPILL NEWS strives to keep our readers up to date with news and events in the music industry. We keep you informed of the most recent information regarding new releases, tour dates, and information items about your favourite artists.
RELATED ARTICLES
el-pkiller mikenews