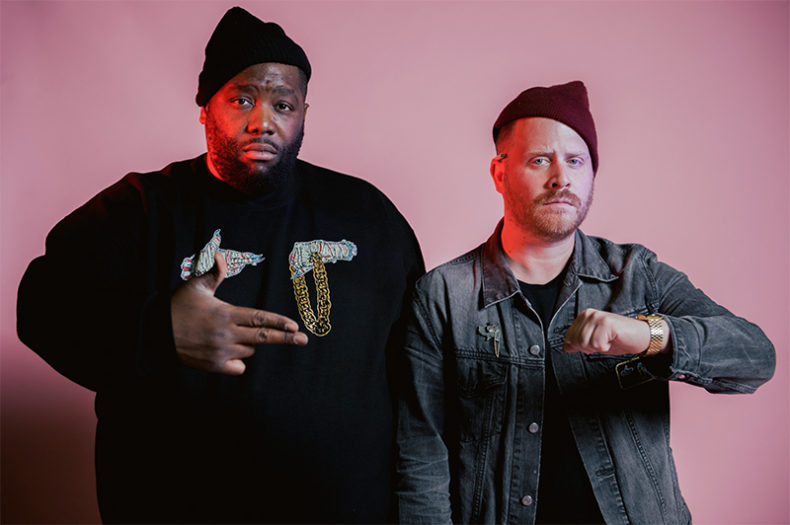 While he may have been talking about one song, chaos is an excellent way to describe watching a set performed by Run the Jewels. From the moment Killer Mike and El-P step onto stage it’s a full on sonic assault. Right out of the gate, everything is dialed to 11 and doesn’t slow down for a minute until the two walk off the stage. They carry such charisma on the stage that the crowd lives in the palm of their hands. Clearly this is a group that loves nothing more than being on stage, and the crowd loves every second of it.

During heavier songs like “Close Your Eyes (and Count to F**K)” and “Talk to Me” mosh pits erupted that would put most punk and metal shows to shame. El-P and Killer Mike may be rappers, but with the anti-establishment themes and political righteousness, they’re probably the most punk band of 2017. They aren’t afraid to call out their leaders and hold them to task. The crowd for their part is more than eager to egg them on. Chants condemning US President Donald Trump frequently erupted with little to no instigation from the stage.

It was only natural that the set list focused primarily on songs from the recently released Run the Jewels 3. It’s a hell of a strong album and tracks like “Panther Like a Panther” and “Call Tickerton” are welcome additions to the groups live repertoire. With some much music coming from their latest release it was a tad disappointing to see music from their first album, Run the Jewels, more or less cut from the set. Only the title track “Run the Jewels” was performed, to the delight of the crowd. But this is only a minor setback, with a catalogue as strong as Run the Jewels’ it is expected that they won’t have time to play every gem.

The world of 2017 is a very scary and uncertain place. We are witnessing the most destructive Presidential administration in decades, employment is uncertain, and those without money are left further and further behind. In spite of all of this; for just under 2 hours at the Danforth Music Hall, Run the Jewels helped make an insane world make sense.

Photographer by choice, writer by necessity. Since moving to Toronto in 2011 Morgan has become an active member of Toronto’s music scene. On any given night he can be found at various venues with his camera in hand. There’s nothing he loves more than exploring all the venues this wonderful city has to offer, discovering new bands and genres along the way.
RELATED ARTICLES
el-pkiller mikelive review

by SPILL NEWS on September 7, 2021
RUN THE JEWELS ANNOUNCE NEW BEER & BEVERAGE RELEASES INCLUDING A SERIES IN PARTNERSHIP WITH BLACK CRAFT [...]
10