THE FIRST COMPREHENSIVE COLLECTION OF HIS MUSIC TO ACCOMPANY THE RELEASE OF HIS MEMOIRS, PORCELAIN

“Music
From Porcelain” is the companion album to Moby’s book of memoirs entitled,
Porcelain, (Penguin Press; May 17). The album is a collection of newly
re-mastered versions of classics including “Go!,” “Honey,”
“Natural Blues” and “Bodyrock,” among many others,
combined with a hard to get collection of classic Electronic music recordings
from artists from 808 State to A Tribe Call Quest. “Music From Porcelain” is
released June 10th on Thrive Music.

“The music in
‘porcelain’ is almost as important a character in the book as i am. to that end I’ve compiled a
collection of songs written about in the book, both mine and other people’s, in
a little time capsule to accompany it. These songs all remind me of the New
York that I lived in and was smitten with from 1989 – 1999,” Moby says.

Moby
was an unlikely fit in the club scene of late ‘80s and early ‘90s New York
City. A devout Christian, vegan, straight white kid from the suburbs, he was an
outlier in a world dominated by people of color, gays, drug use and general
debauchery. And yet, Moby was able to not only to break into one of the most
difficult scenes in the entertainment field, but to also build a thriving
career and go on to become one of the most interesting and iconic musicians of
our time. By turns funny, disquieting, and moving, his unforgettable memoir,
PORCELAIN, he recounts the ups and downs of his fledgling career.

In
the midst of this organized chaos, Moby remains open to new people and
experiences in a way that feels not only refreshing, but also nearly impossible
in today’s New York. As a result, he finds himself crossing paths with some of
the most memorable artist to come out of that era: Madonna, Run-DMC, Jeff
Buckley, Sonic Youth. Moby’s is a wide-eyed ride: he gets cursed at publicly
for ruining a freestyle session with Darryl McDaniels
when he accidentally bumps the turntable, he shares a bathroom—and
falling in love at first sight—with a dominatrix at a swingers party, and
unwilling to turn down work, spins three shows in one night in England. His
humility, curiosity, work ethic, and earnest desire bring joy to people through
his work lead to success and an the inspiring story of one of the most
influential musicians in modern history.

Moby
will be embarking on a North American Book Tour throughout May and June. Check
out all the dates below.

After a three-year break, Thrive Records, has re-launched as Thrive Music. In addition to
releases from new an up and coming artists like Cheat Codes, BRKLYN, and Hunter
Siegel, the label will also be releasing a new album by Paul Oakenfold in the
fall. 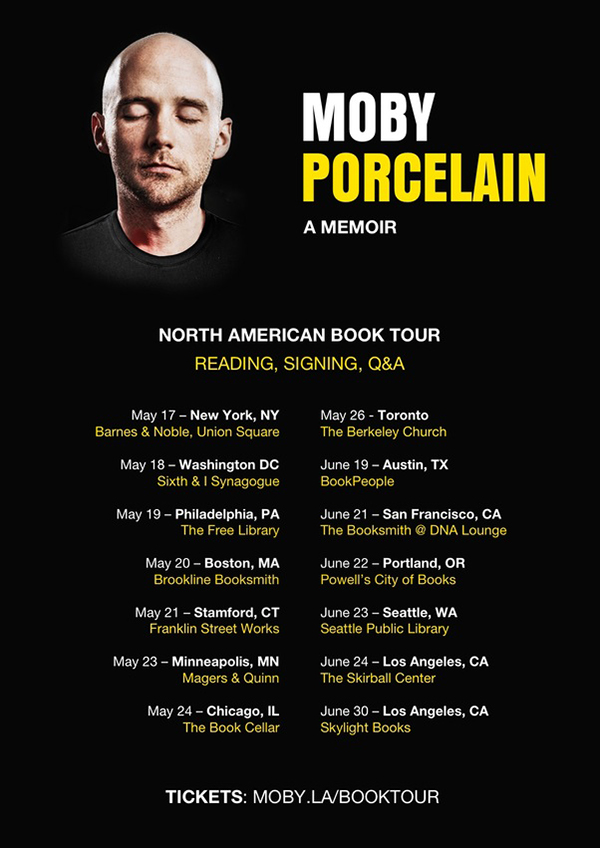 SPILL NEWS strives to keep our readers up to date with news and events in the music industry. We keep you informed of the most recent information regarding new releases, tour dates, and information items about your favourite artists.
RELATED ARTICLES
mobynewsporcelain

by Gerry Young on March 2, 2018
Moby Everything Was Beautiful, And Nothing Hurt Arts & Crafts American electronic DJ/producer/singer-songwriter Moby’s latest album Everything Was [...]