SPILL NEWS: WILL BUTLER CAPTURES THE SPIRIT OF HIS DYNAMIC LIVE SHOW WITH FRIDAY NIGHT 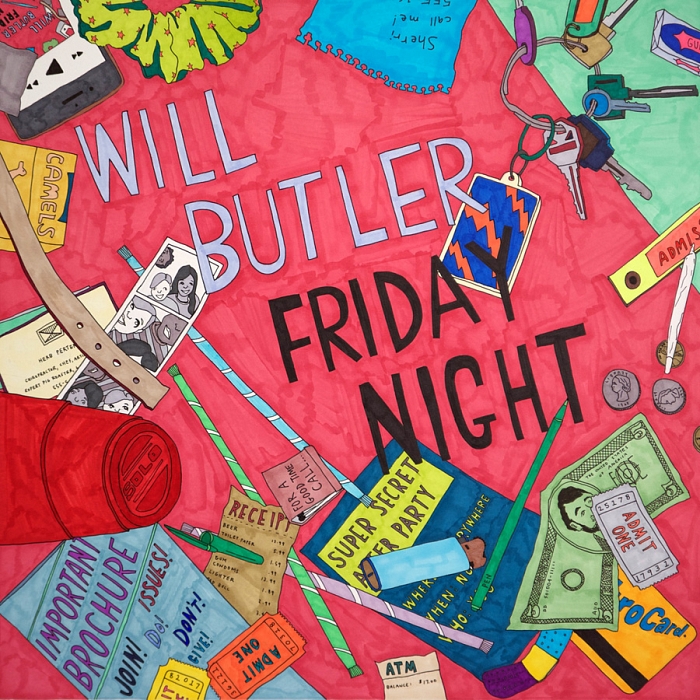 On June 17, Will Butler returns with Friday Night, an album of live performances from Butler’s tour supporting his debut album, Policy. Recorded mostly at Lincoln Hall in Chicago on June 4, 2015, Friday Night includes five brand-new songs, five from Policy, and two songs he wrote for The Guardian newspaper last year.

Capturing the energy of the dynamite Will Butler band was the major inspiration for this release. Miles Arntzen (EMEFE, Antibalas) played drums (standing up at a full kit-he didn’t use a hi-hat pedal, so he could stand on that leg while working the kick drum with the other), Julie Shore played synth bass, and Sara Dobbs played synth leads and Mellotron pads. Everybody sang backing vocals.

Will wrote of the album: Think of this as a comedy record. In some ways literally-Brooklyn comedian Jo Firestone does the introduction and the “solo” in “Friday Night”-but also, it’s an album based on working out ideas in a room full of people, playing off their energy and expectations. It’s about taking complicated emotions and wringing communal joy from them, and then translating that joy onto record. So here you go!

Featuring artwork by Broad City’s Abbi Jacobson, Friday Night is the perfect companion to Policy and an exciting look ahead to what we can expect from Will Butler. Pre-order Friday Night now on CD or LP in the Merge store along with an exclusive tote bag designed by Will himself. Pre-order also available via iTunes.

SPILL NEWS strives to keep our readers up to date with news and events in the music industry. We keep you informed of the most recent information regarding new releases, tour dates, and information items about your favourite artists.
RELATED ARTICLES
merge recordsnews

by Aaron Badgley on February 28, 2020
Caribou Suddenly Merge Records Suddenly is his fifth studio album by Caribou. Although Dan Snaith plays all of the instruments on his recordings, he uses a band when he tours, which allows him to [...]
9.0