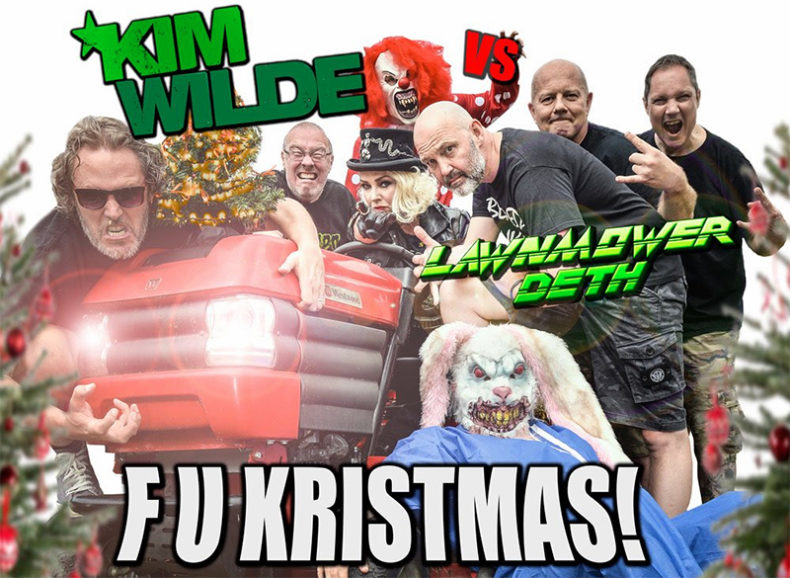 “F U KRISTMAS” OUT DECEMBER 1 VIA WILDEFLOWER RECORDS

Kim Wilde, the most successful female UK artist of the 80s, has joined forces with thrash metal legends Lawnmower Deth to release a special anti-Christmas single: ‘F U Kristmas’, due for release on 1st December via Wildeflower Records.

‘Rockin’ Around The Christmas Tree’, Kim’s 1987 duet with Mel Smith released for Comic Relief, peaked at number 3 and now bookies are reporting keen interest in this new duet topping the festive charts. “We took a few calls at the beginning of the week and offered 50/1 on the assumption that it was ‘Rockin’ Around The Christmas Tree’. It now appears we’ve been duped and we are facing the prospect of a significant payout on a new, contemporary and extraordinary Christmas cracker” said William Hill spokesman Rupert Adams.

Teaming up with the adored metal legends was “a collaboration bound to happen since appearing together at Download Festival in 2016”, explains the iconic singer, recalling the performance as “a personal highlight of my career”. The association between the two had been long standing since Kim has previously stated that Lawnmower Deth’s cover of her biggest hit ‘Kids in America’ back in 1991, is her favourite version of the seminal track. “Lawnmower Deth came up with the idea of us collaborating on a Christmas tune and I said yes immediately, feeling our worlds had become inextricably linked”.

Lawnmower Deth vocalist, Pete Lee’s excitement is clear about what he calls “the greatest project we’ve been involved in” and following their surprise three-song set during the popular British rock festival he stated “it wasn’t a polar leap to ask Kim to join us at Download Festival in 2016. Now, working on a Xmas single together, some would say it’s the most bizarre juxtaposition since KLF and Extreme Noise Terror at the BRITS, I prefer a bunch of loveable chancers married with pure pop royalty”. 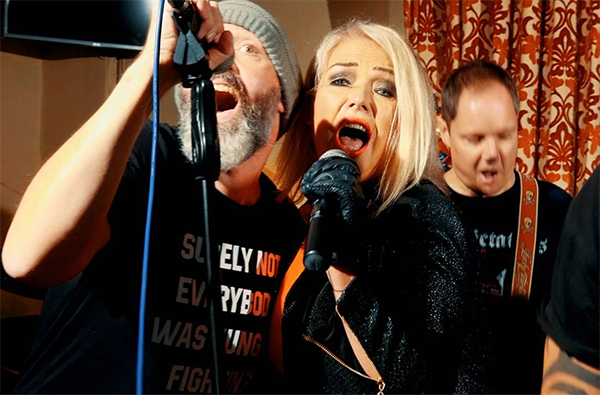 Speaking on the writing process, Kim explains, “Ricky Wilde and I came up with a melody and additional lyrics and before you know it we had an utterly preposterous Christmas single”. Lawnmower Deth add their signature humorous heavy rock, thrashing and all that is conventional and tossing it out of the window to create an original anti-Christmas single which was written, in Wilde’s own words “for those who can’t stand it, whilst respecting those who love everything about it”.

The single is a Punk and Thrash-Metal crossover number with thrashing riffs and hardcore vocals. An un-pretentious cut, over which Kim’s pop queen vocals stand bold, as though she had always sung over heavy guitar-laden rock. The song’s bridge includes all the secret chords and harmonies associated with previous famous festive songs but this time wrapped around a frenetic tempo and bombastic energy to create a wholly different style, changing quickly and frequently, never allowing the  listener to succumb to boredom.

No stranger to Christmas records, Kim Wilde previously released the critically acclaimed ‘Wilde Winter Songbook’, which featured her favourite festive and winter inspired songs alongside her originals. Her love for unusual recordings led her to film a video for a new version of ‘Rockin’ Around The Christmas Tree’ which parodied her famous impromptu train viral sing-a-long.

Kim will also bring her ‘The Wilde Wild Xmas Show’ to Manchester’s O2 Ritz for a special one-off date on 22nd December – with support from fellow 80s female icons Toyah and Carol Decker (T’pau). Joining them, Lawnmower Deth are also set to inject the party with their unique brand of heavy-as-hell rock.