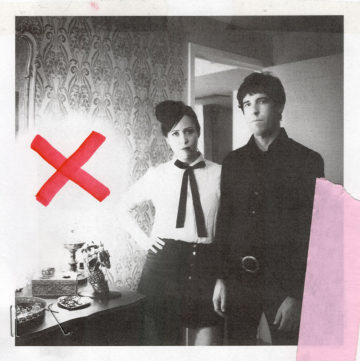 Dion Lunadon’s dedut album retains certain elements from his previous bands, the bouncy uptempo simplicity of The D4 and some of the slower songs have the spacey vibe of A Place to Bury Strangers, without seeming derivative and managing to retain its own identity.

The album is retro sounding, in that it’s production is raw, it’s instrumentation is minimal which works in its favour and the writing feels improvised for the most part. Particularly in the (almost) instrumental track “Hanging by a Thread” as well as the lengthy instrumental break in “Move”, these passages help the album feel less like a solo artist trying to branch out from their established projects and more like a band effort which has long since been a problem for these types of breakaway albums.

This album clocks in at 29 minutes which is the perfect length for an album of this nature. It retains a high amount of energy at all times with the longest song being shy of 4 minutes. The best songs on the album are the shorter tracks, particularly “The Ripper” which has a rockabilly feel to it. This makes the record feel more diverse without bringing down any of the energy the rest of the album has worked so hard to build up. The short songs make the album easier to digest in one sitting, that said there are times when the vocals are completely overpowered by the backing instruments and the lyrics are usually really simplistic and understated.

The album closes with “No Control” which feels for the most like a Place to Bury Strangers track. It’s slow, melodic and has this unmistakable shoegaze atmosphere which is a strange closer seeing as it is the slowest track and feels like a “cooldown” song given how abrasive the rest of the album is and the change of pace is more than welcome.

Overall, Dion Lunadon’s self-titled is a promising starting point as a solo musician and provides much to be excited for from him in the future.

The Spill Magazine is a Toronto-based online publication dedicated to covering the independent music scene with a strong focus on our thriving hometown talent. Our writers bring you up-to-date news, in-depth features on musicians and reviews for the latest CD releases. We also travel to the front lines for all local festivals including Canadian Music Week and North by Northeast. Don’t forget to check out our Facebook and Twitter pages for all daily Spill updates.
RELATED ARTICLES
album reviewshowl
9.0