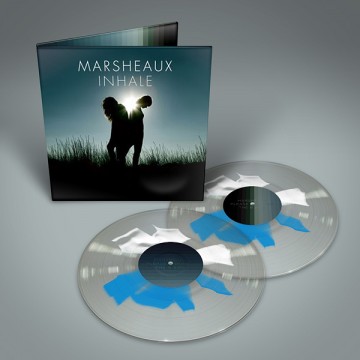 Toronto-based Artoffact Records announced last week that they will be reissuing Inhale, the 2013 album by Greek duo Marsheaux, on vinyl.

Formed in 2000, Marsheaux has surged in popularity in recent years, with releases on Les Disques Du Crépuscule, Out of Line, Artoffact Records, Anna Logue Records, and Undo Records. They have remixed OMD; their music has been used by The Human League and name-checked by BBC radio hosts Tom Robinson and Stuart Maconie; and recently VNV Nation tapped the duo as support on a tour in Germany.

The project’s fourth record, Inhale, sold out of an original vinyl run in 2014. This new reissue of Inhale includes a special effect that is quite rare called shape-splatter. The effect looks a bit like the more familiar splatter effect, but instead of streaks eminating from the vinyl disc’s center, there are geometric shapes.

The effect was so costly and complicated to produce, that the plant which produces it (GZ in the Czech Republic) have stated that they will no longer be making it in the new year. Marsheaux’s record will be one of the last.

Artoffact will be producing 199 copies of this wonderful and unique piece, and the planned shipping date is February 2016.

SPILL NEWS strives to keep our readers up to date with news and events in the music industry. We keep you informed of the most recent information regarding new releases, tour dates, and information items about your favourite artists.
RELATED ARTICLES
artoffactmarsheauxnews
5.0

by D.L. Smith-Lee on June 3, 2022
Encephalon Echoes Artoffact With their first release in over five years, Encephalon makes their return with their fourth studio album, Echoes. Lead vocalist Matt Gifford very much sounds like the unsettling and haunting growls of heavy metal [...]

by Patrick Li on February 22, 2021
HIS STORY RIGHT NOW A CONVERSATION WITH cEvin Key Kevin Crompton, or cEvin Key as he is known as in the music industry, released his latest solo work ent­­itled Xwayxway (anglicized as whoi whoi) in February of 2021.  Once the drummer of [...]
10