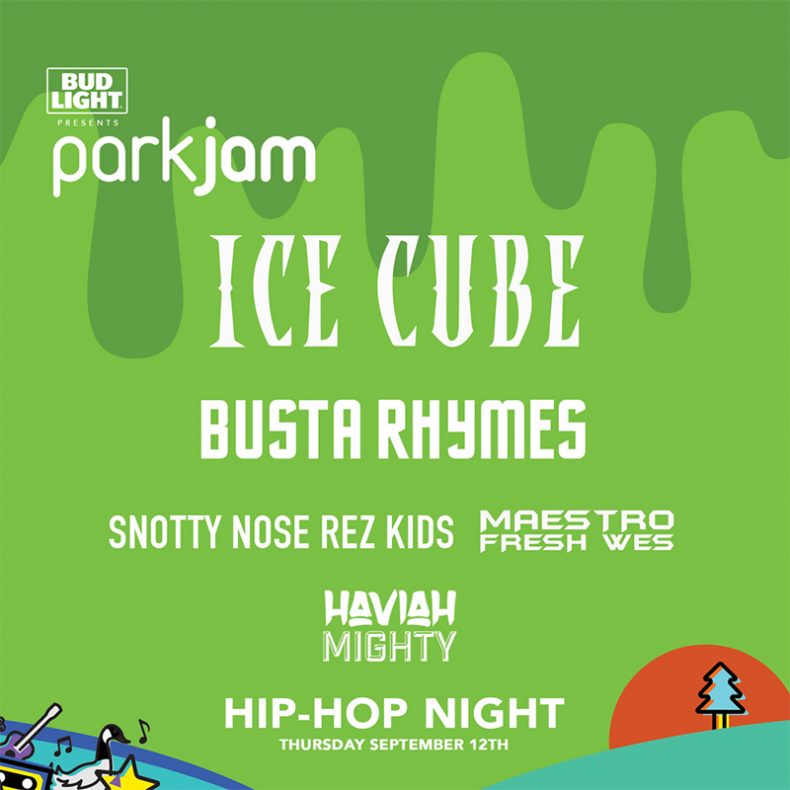 Parkjam Hip Hop Night was a celebration of boombap music from the ‘90s. It was also host to some exciting up-and-comers from Canada, specifically Haviah Mighty and Snotty Nose Rez kids, who are both nominated for a PolarisMusic Prize this year.

Haviah Mighty was the first to perform. The Brampton artist is known for her hardheaded lyrics and exciting stage presence. She quickly warmed up the crowd with “Blame” from her debut album 13th Floor.

Although it was still early in the afternoon, Haviah Mighty really brought the power to Parkjam.

Snotty Nose Rez Kids are an indigenous hip hop group composed of Young D and Yung Trybez. The duo has been on a roll lately, having released three albums since 2017. Their trap-inspired music is catchy and filled with themes of protest. A highlight during their performance was the song “Boujie Natives:”The rappers stuck around after the show and took plenty of pictures with their fans.

Maestro Fresh Wes has been a staple in Canadian hip hop since the late ‘80s. He played his classic hits such as “Let Your Backbone Slide” and “I Know Your Mom,” which he entertainingly performed acapella. Method Man and Redman also brought out the throwbacks, playing tracks off of their collaborative albums Blackout!and Blackout! 2.

Ice Cube took the stage shortly after sundown. While it has been over 30 years since he first broke onto the hip hop scene, the rapper sounded fresher than ever. He played classic songs spanning his career such as “No Vaseline” and “Gangsta Rap Made Me Do It”.

Smoke clouds filled the air while the L.A. native rapped over funky West Coast bass lines. “Did you know the new white was orange/Boy, you’re showing your horns/They’re tryin’ to replace my halo with thorns,” he flowed on the song “Arrest the President.” He ended his set with his highest-charting single, and one of the most classic hip hop songs of all time, “It Was A Good Day.”

Cory is a film maker and music lover raised in the GTA. Ever since a young age music has been a big part of Cory’s life and he often combined his love for music and film together, creating videos of him and his friends skateboarding to their favourite songs. This trend continues in his life as everything he surrounds himself with is always involved with or inspired by music.
RELATED ARTICLES
haviah mightylive reviewlondon

by SPILL NEWS on January 10, 2020
WAVELENGTH FESTIVAL CELEBRATES 20th ANNIVERSARY | #WL2020 Wavelength Music warms up winter with the launch to their 20th anniversary year and the Wavelength Winter [...]