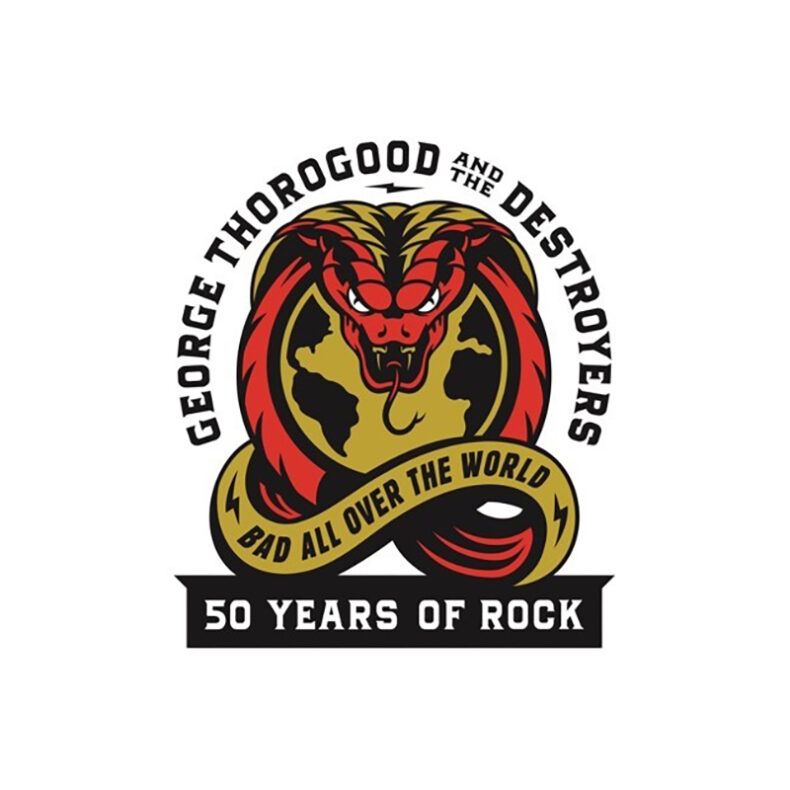 THE ORIGINAL GEORGE THOROGOOD OUT NOW

On December 1st, 1973, a guitarist, a drummer, and their rhythm guitarist loaded their gear into the drummer’s Volkswagen bus and drove to Lane Hall at The University of Delaware. In a week that saw new albums by Wings, Black Sabbath, and Bachman-Turner Overdrive, the three-piece band proceeded to play covers that included “No Particular Place To Go,” “Madison Blues” and “One Bourbon, One Scotch, One Beer.” The drummer, Jeff Simon, recalls the crowd was wary at first, “then it was like someone flipped a switch.” By the second set, the dance floor was packed.

“After the gig,” the guitarist says with his now-familiar grin, “Jeff and I thought, ‘maybe we’re onto something.'” It was the first-ever performance by George Thorogood & The Destroyers.

Five decades, more than 8,000 live shows, and 15 million albums later, George Thorogood and Jeff Simon – with long-time Destroyers Bill Blough, Jim Suhler, and Buddy Leach – now announce their Bad All Over The World – 50 Years of Rock Tour. “From that very first show, we’ve stayed true to ourselves and the music we love,” says Thorogood. “We’ve decided to celebrate our first half-century by throwing the biggest and baddest rock party ever.”

Additional cities and tour updates will be available at www.georgethorogood.com.

SPILL NEWS strives to keep our readers up to date with news and events in the music industry. We keep you informed of the most recent information regarding new releases, tour dates, and information items about your favourite artists.
RELATED ARTICLES
george thorogoodnews

by SPILL NEW MUSIC on October 13, 2022
GRIMELDA – “GEORGE THOROGOOD” THE ORCHARD MUSIC/TRANSISTOR 66 RECORD CO. Grimelda (FKA The Faps) is the collaborative art-punk meets freak-rock project of Blair Colwell and Skyler Cafferata from Saskatoon. After 10 years in the [...]
8.0

by Aaron Badgley on December 18, 2020
George Thorogood And The Destroyers Live In Boston, 1982: The Complete Concert Craft Recordings George Thorogood has been making music since the early 1970s, with his roots firmly grounded in the Delta Blues. However, when he formed The Delaware [...]
9.0