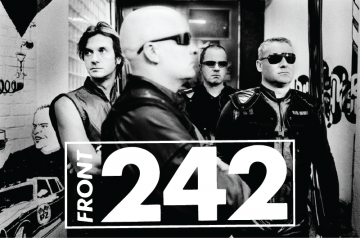 The Belgian electro cult act Front 242 has started a page on the emerging social networking service Tsū. This makes the band the very first Belgian act to set up a presence on the brand new social network which is taken the internet by storm.

The band’s first post was a news update about their recent remix contest which is having a delay due to the huge number of remixes that were entered. Front 242: “The Front 242 remix project has simply overwhelmed us. SO MANY remixes! We apologise for the delay but we are working on it as fast as we can.” Since that message the band has been actively posting on their Tsū page which is now already over 1000 followers strong and this after just a few days.

Front 242 joins the ranks of several other high profile acts from other scenes that have opened shop on the network, which is a lot more artist friendly than Facebook thanks to an unlimited reach. Facebook is apparently very afraid of the network and is on purpose blocking every link towards the social network claiming it is a security risk. But what really happens is that Facebook is simply censoring Tsū in a way which only North Korea is able to.

Tsū is an invitation only social network and you’ll need an invitation link. Here’s the one from Front 242: https://www.tsu.co/front242 If you ever wanted to be the ‘child’ of Front 242, this is your moment. Just click ‘Join’ and complete the registration.

Users who spam or post inappropriate content will be banned in order to preserve the community, so only sign up if you want to play the game correctly.

SPILL NEWS strives to keep our readers up to date with news and events in the music industry. We keep you informed of the most recent information regarding new releases, tour dates, and information items about your favourite artists.
RELATED ARTICLES
front 242news