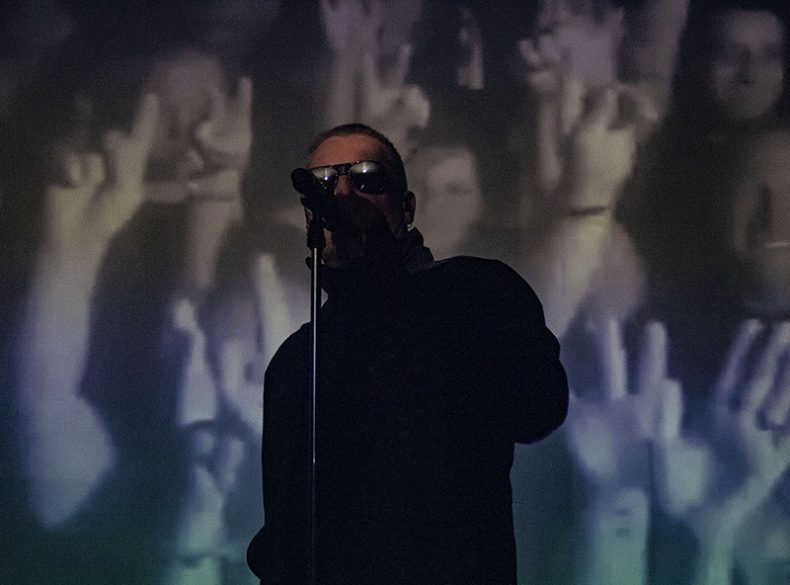 The warehouse district in Minneapolis was buzzing with activity tonight as a couple of hundred people funneled into the intimate Fine Line venue, for what was an unexpected but very much anticipated stop on the Black To Square One tour by Belgian electronic group Front 242. The show had been rescheduled from 2020.

The show opened with Endif, a musical act that is honestly hard to define, or actually, a musical experience to put into words. Electronic experimentation may be a generic term for the type of music that was played, but the performance was far from that. In the approximate 30-minute set, the audience watched in awe as Jason Hollis, an interdimensional being in a large white cloak and LED mask displaying dot matrix style facial features, pored over his control board. He conducted live remixing of synth-infused sonic and chaotic compositions that at times made your entire body tremble with intensity from the bass. It was enough to make me glance at the exposed brick wall of the venue half expecting it to crumble. Video projection complimented the music along with an intense light show which at times were downright disorienting. Nonetheless, still a very unique performance.

It was evident that die-hard Front 242 fans were in heavy attendance as they crowded forward in eager anticipation for the group to display their 40-year legacy of Electronic Body Music (EBM) they helped pioneer. 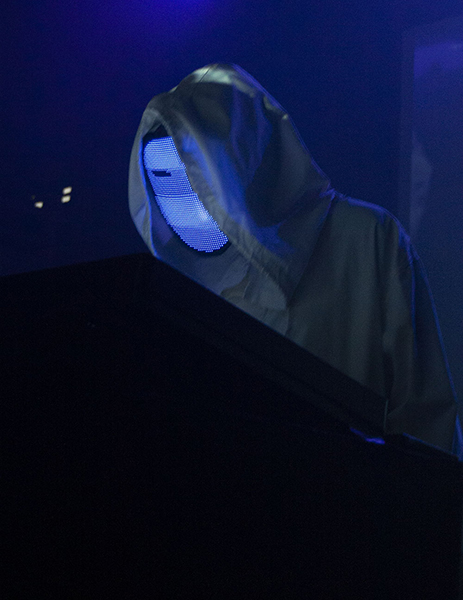 Cameras on stage projected the audience onto the large screen for the first couple songs of their newer material. Videos and photos of the band later danced across the screen as Meyer and Jonckeere took turns with vocal duties, staying towards the front of the stage a majority of the time. The approximately hour long set was a nonstop display of colorful lights, that made for continuously moving black silhouettes as they paced along the stage. Their aggressive energy was infectious, and the crowd was lively from beginning to end, many of which could be heard singing along despite the music being so loud. There had to be at a least a few curious onlookers as they passed the small venue that seemed to be bursting with music at the seams.

Songs in their set included the first song of their first album from 1982 “Operating Tracks” plus fan favorites “Quite Unusual” and “Headhunter”.

It’s hard to imagine any Front242 fan, or fan of EBM music in general to be disappointed in any way in their live performance and can’t compare to just listening to their music in the comfort of your own home. It’s easy to understand why they’ve put out so many live albums.

To anyone who is even remotely a fan of their music, it would be in your best interest to experience one of their shows. You won’t be disappointed.

Trista’s a music addict who’s taste in music spans over numerous genres. She enjoys playing her bass guitar, but honestly she’s not very good at it. So she goes to concerts and watches real musicians who are far more talented than her. You’ll find her there in the front row, because, well, she’s short and wouldn’t be able to see the stage very well otherwise, and because she strives to get the perfect photo to capture the experience.
RELATED ARTICLES
fine linefront 242headhunter
10