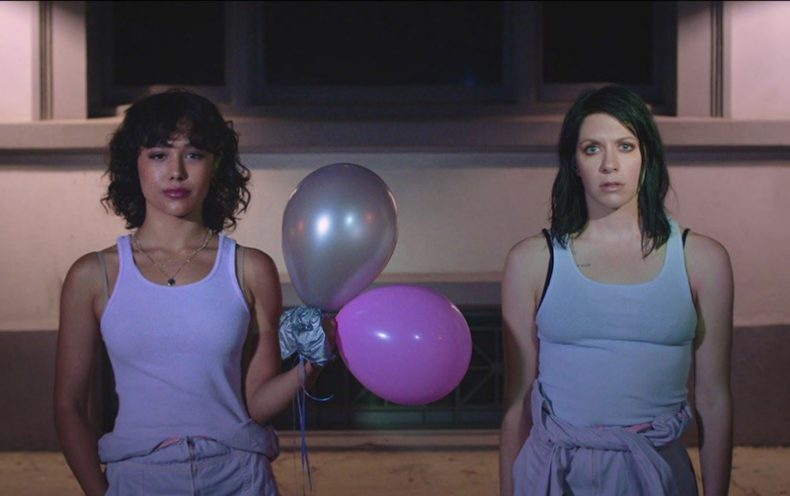 Following the release of her third full-length album Solutions, which dropped earlier this month on Night Street/Interscope Records, GRAMMY® Award-nominated artist K.Flay has delivered another compelling visual, this time for her latest single ‘Sister.’

Picking up from where the ‘Bad Vibes’ video left off, ‘Sister’ is the second part of a visual trilogy that continues the themes of sisterhood and support. Having escaped captivity (from the ‘Bad Vibes’ video), K.Flay and a female companion have broken free, only to find themselves in a world where everyone else seems to be moving backwards. The video was directed by Clara Aranovich and shot in Downtown Los Angeles. Fun fact: Kristine and her ‘Sister’ are the only ones moving in forward motion while the world around them is moving in reverse – To create this, Kristine had to learn the song completely backwards (in phonetic gibberish). Watch the video for ‘Sister’ below or HERE.

In other news, K.Flay has launched the first of its kind music-focused “microcast” (a shorter form podcast) expressly designed and produced for smart speakers (Amazon and Google Home) around the world. “What Am I Doing Here” is hosted and curated by K.Flay and features conversation, jokes, musical interludes and special guests including Sam (X-Ambassadors), Bishop Briggs, Michael (Fitz and the Tantrums) and many more friends and family. Equipped with a mobile studio including high quality microphones for her iPhone, apps for recording phone calls and more, “What Am I Doing Here” is recorded 100% live. Whether she decides to record in a supermarket, on the tour bus, or on the phone with her mom or kindergarten age niece, the idea is to transport the listener into her world versus the standard studio recordings. To listen on Alexa, simply say “Alexa, enable K.Flay show” and on Google Home, say “OK Google, talk to K.Flay show.”

This fall, she is also confirmed to perform at Austin City Limits as well as embarking on THE SOLUTIONS TOUR, which kicks off on September 3 in Phoenix, AZ. Following a 19-city run in North America, she’ll venture abroad for the UK and European leg of the tour, performing in London, Amsterdam, Brussels, Paris, Berlin, Stockholm, Prague, Munich, Frankfurt and more. For tickets and more information, go to: www.kflay.com/tour

In the Summer of 2018, she re-teamed with frequent collaborators Tommy English [Ariana Grande, Kacey Musgraves, Thirty Seconds to Mars] and JT Daly [Mutemath], as well as Joel Little [Lorde, Taylor swift, Khalid] and CJ Baran. Recording in Los Angeles and Nashville, she widened the scope of her signature style, incorporating a variety of analog synths along with live bass and guitar, bobbing and weaving between pop, rock, hip-hop, and electronic moods.

“The title Solutions came to me really early in the process,” she goes on. “The solution to almost every problem is usually really simple. For me, it’s so basic: staying connected to the people I love, taking care of myself the way I’d want my friends to take care of themselves, and doing things I know are going to make me happy – not what social media or strangers or society tells me. So many of my past records were about problems. Right now I’m in a place where I’m looking for some light. Balance is important. Life doesn’t have to be chaotic in order to be meaningful.”

The first single from Solutions is “Bad Vibes,” which slips clever quips such as “You’re the sequel that sucks”between a siren swell of synths, thick percussion, and an unshakable and undeniable chant, “You give me bad vibes…” Propelled by resounding piano and nimble rhymes, “Good News” leaps over glitchy beats and into a reminder that we can be “our own best friend.” Something of a spiritual successor to her Grammy-nominated “Blood in the Cut.” The frosty and fiery anthem “Ice Cream” serves up “a breakup song that isn’t too heavy.” On the other end of the spectrum, the uber-personal “Sister” delivers a heartfelt message of sisterhood as she claims, “I wanna be your sister till the end.” “My sister and brother aren’t biologically related to me, and I always wanted them to be my ‘real siblings’,” she goes on. “It was important for me to dedicate this song to them. On a larger level, I believe sisterhood should be available to everybody, regardless of gender. Sisterhood is about creating your own family.” Also featured on her latest album is the Dan Reynolds co-penned “This Baby Don’t Cry,” which The New York Times called”post-punk,” and praising K.Flay for “ methodically [tossing] aside feminine stereotypes.”Most recently, Los Angeles based artist released Not In California.” Produced by Tommy English, K.Flay delivers her trademark grit and spitfire lyricism in yet another thundering foot stomper. Speaking about the song, she reveals: “We’re not in Kansas anymore.’ I think we all know that sensation. Of being in a place that resembles the world you know, but feels different somehow. and the difference is unsettling and disorienting and scary. These days I’ve been feeling a bit like Dorothy. I see the plastic islands and the melting glaciers and the 24-hour news cycle where people shout because loud seems to win and I think to myself. ‘We’re Not in California anymore.’

by Michelle La on July 12, 2019
​​K.Flay​  ​​Solutions​ ​​Night Street/Interscope Records/Universal Music Canada​  Pop music in the past few years has taken a serious and sparse bent. The dark depths of pop mined by the likes [...]