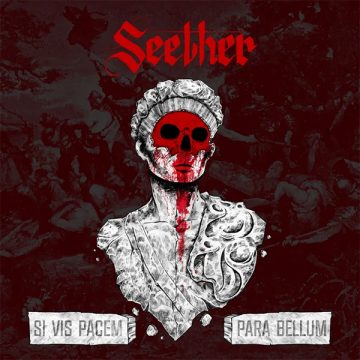 South African alternative rock band Seether is releasing its first album since Poison The Parish. This new project is baptized “Si Vis Pacem, Para Bellum”, which translated from Latin means “If you want peace, prepare for war”. This 53 minutes will catch you immediately and take you to different emotional phases.

Seether is the perfect example of how a band can change its sound enough that it’s new and exciting, without losing its essence. Curiously, this album is a blend of different sounds, emotions, and genres. At first glance you will be able to identify head-banging riffs, then there are some progressive rock vibes, low-pace melancholic tempo, and dark guitars mingled into a beautifully musical cohesion.

The first track of the album, “Dead and Done”, begins with a dynamic guitar riff which is accompanied by the ripped vocals of Shaun Morgan. Here you can feel the anger and discomfort.

“Beg” is a furious song. It begins at a very low pace and after the first minute “Beg” gives you what it could be a vulgar display of power in a Seether way. Just pure energy.

“Bruised and Bloodied” is the post-grunge song of the album. It starts with a nicely-crafted progression of bass guitar notes, similar to “Sliver” by Nirvana. Then the song turns very loud and powerful.

However, the most interesting song in this production is “Dangerous”, a song where it is possible to see how progressive and technical Seether has become over time. The guitar riff is hauntingly melodic and melancholic. The verses and the chorus are a definite earworm.

Si Vis Pacem, Para Bellum is for sure a solid production, very versatile and progressive. It offers the listener a nicely-balanced variety of sounds and feelings that will keep you stuck to the album from beginning to end.

Sebastian Mahecha is a postgraduate journalism student at Humber College. I’m passionate about music, I enjoy listening to mostly any kind of music, from thrash metal to most underground salsa. Politics and social justice have been of my interest for many years, so whenever a new musician records a song about controversial topics I’ll be there to take a look.
RELATED ARTICLES
album reviewalbum reviewsdangerous
8.0