SPILL NEWS: CITY AND COLOUR’S PLATINUM LP ‘BRING ME YOUR LOVE’ TO BE RELEASED NOV 22 AS LIMITED EDITION SINGLE LP 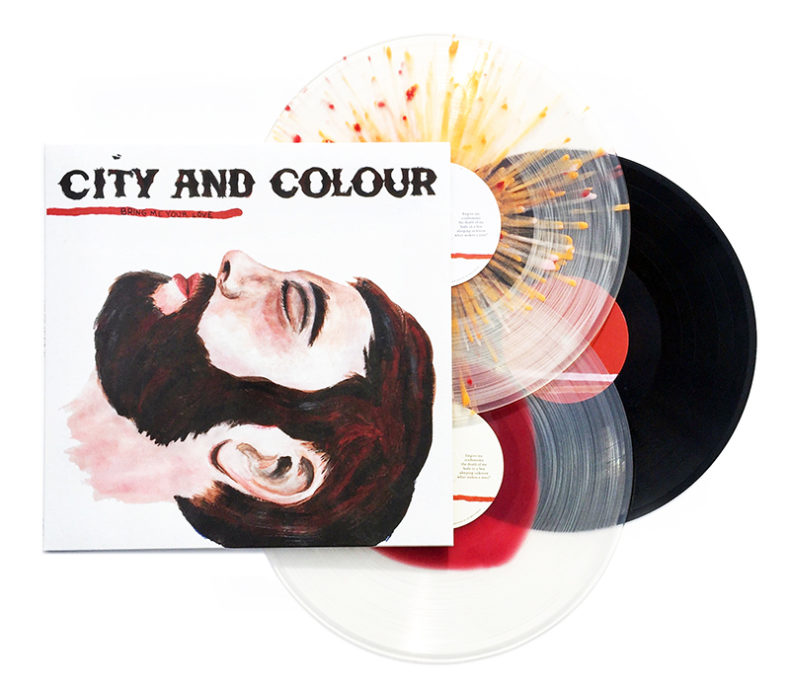 City and Colour’s platinum-selling sophomore LP Bring Me Your Love (Dine Alone Records) will be available worldwide as a single LP with the original artwork for the first time on November 22. The new pressing will come packaged with a lyric insert and digital download card and is limited to 2000 copies split over 4 colour variants. A Dine Alone exclusive version (clear with oxblood) limited to 100 copies, a City and Colour Exclusive (clear with orange, pink and oxblood splatter) limited to 400, a black vinyl edition of 500 copies will be available online and in Canadian retail outlets. In the new year, international fans will be able to purchase one of the remaining 1000 copies on oxblood coloured vinyl through local retailers. The LP is available to order as of 12:01am ET on November 22 via the Dine Alone Store HERE and City and Colour’s store HERE.

Bring Me Your Love debuted at #3 on the Top 200 Soundscan, #11 on Billboard’s Top Heatseeker Chart (2008), and was the #1 top-selling album on iTunes garnering Green a 2009 JUNO award for “Songwriter of the Year”. Co-produced by the late Dan Achen and recorded at Catherine North Studio in Hamilton, the instruments and vocals for Bring Me Your Love were carefully recorded live off the floor, giving the songs depth and intimacy, and eschewing the cut-and-paste approach that is so common in today’s recordings. Bring Me Your Love also features Canadian Music Hall of Famer Gordon Downie of the Tragically Hip, who adds his distinctive vocals to the hit single “Sleeping Sickness”, and performed the track alongside Green at the 2009 Juno Awards in Vancouver.

The album was met with much critical acclaim internationally including Billboard who lauded Bring Me Your Love, calling it “warm and more intimate” and Alternative Press who praised the record for “picture-perfect imagery and a brutal honesty that throws back to a time when talent meant skills, not studio trickeries… an inspiring album.”

City and Colour, the moniker of singer-songwriter Dallas Green, is undeniably one of the biggest groundswell stories to emerge from Canada. With 3 JUNO Awards under his belt — including two SONGWRITER OF THE YEAR awards (2009, 2012), and 4 Platinum-selling studio albums in Canada, Green’s latest and 5th studio album If I Should Go Before You debuted #1 on the Top 200 Soundscan, City and Colour’s third consecutive chart-topper in Canada. The LP also made serious waves internationally debuting at #16 on the U.S. Billboard 200 Chart and #5 in Australia where Green’s LP Little Hell went GOLD. In 2014, Green collaborated with international superstar Alecia Moore (aka P!nk) on a new project titled You+Me. The duo’s acclaimed debut, rose ave., debuted at #4 on the U.S. Top 200 Chart, #1 in Canada, #2 in Australia culminating in memorable performances on Ellen and Jimmy Kimmel Live. Having performed to countless sold-out crowds around the world, City and Colour recently headlined his first arena tour across Canada, including 2 dates at Molson Canadian Amphitheatre in Toronto.

Bring Me Your Love Track Listing

SPILL NEWS strives to keep our readers up to date with news and events in the music industry. We keep you informed of the most recent information regarding new releases, tour dates, and information items about your favourite artists.
RELATED ARTICLES
city and colourdallas greendine alone records