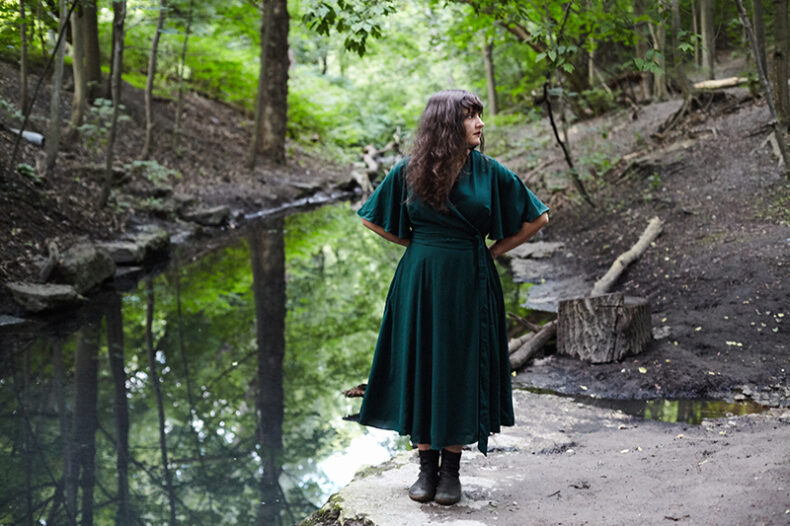 As Abigail Lapell’s tour dates continue this week with stops in Alberta and BC, the acclaimed songwriter is sharing the new animated video for “Scarlet Fever”, a track off her latest album, Stolen Time, out now via Outside Music. “The idea for this video was a miniature fever dream exploring quarantine, isolation and folkloric rituals of healing and recovery,” says Lapell. “It’s the third in a three-part series of music videos made in collaboration with Montreal puppet theatre Panadream over the past five years and three albums. I started writing this song in the early days of COVID, which felt like such a fragile, uncertain time. The lyrics are loosely inspired by an elderly relative’s stories of being quarantined with scarlet fever in the 1920s, which made a big impression on me as a child. Some of that imagery shows up in the video – like the red sign posted on the door of a quarantine house – along with handmade marionettes, shadow puppets, animation and elaborate set pieces. We wanted to create a tiny, surreal world with its own shifting and uncertain logic.”

Over the past decade and three spellbinding albums, Lapell has garnered two Canadian Folk Music Awards (English Songwriter of the Year in 2020 and Contemporary Album of the Year in 2017), hit number one on Canadian folk radio, and accrued a staggering 13 million+ Spotify streams while touring widely across Canada, the U.S., and Europe.

Her latest LP, Stolen Time, out now via Outside Music, strikes a fine balance between her hushed acoustic debut, Great Survivor, and her two rockier, Chris Stringer produced records, Hide Nor Hair and Getaway. Stolen Time brings a live-off-the-floor 70s folk-rock vibe with more structural experimentation to the table on songs that feel expansive in their scope; unhurried, psychedelic, and other-worldly.

For a full list of dates and ticket information, please visit abigaillapell.com/shows

SPILL NEWS strives to keep our readers up to date with news and events in the music industry. We keep you informed of the most recent information regarding new releases, tour dates, and information items about your favourite artists.
RELATED ARTICLES
abigail lapellnewsoutside music
9.0

by Ljubinko Zivkovic on April 22, 2022
Abigail Lapell Stolen Time Outside Music What do you usually expect from a subdued singer-songwriter album? A voice and a single instrument? An interesting track or two and a bit of [...]
8.0

by Wayne Judkins on February 1, 2019
Abigail Lapell Getaway Coax Records In following up the award-winning Canadian folk of 2017’s Hide Nor Hair, Abigail Lapell had her work cut out for her. Fans will no doubt be more than [...]

by Elizabeth Andrews on January 20, 2017
“DIRTY” DREAMS AND THE WILDERNESS OF FINDING HOME AN INTERVIEW WITH ABIGAIL LAPELL Abigail Lapell follows the dreamy DIY textures of her 2011 album, Great [...]