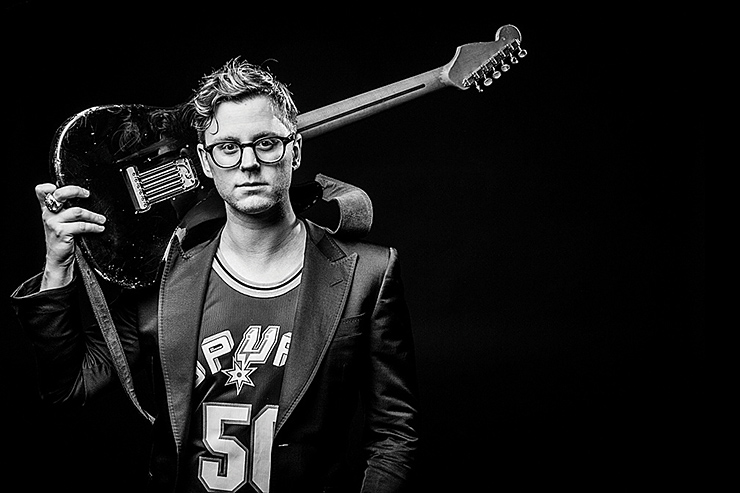 The “Big Sky” music video is breathtakingly cinematic, boasting entirely original landscape footage from across the Southwest-the Bonneville Salt Flats and Zion National Park in Utah; Antelope Canyon and Joshua Tree National Park in Arizona; Mohave Desert in California; and abandoned houses along Route 66 in Texas. The result is the perfect marriage between Pearl Lion’s synths and driving guitars and the gritty yet mystical visuals. To watch Huiting’s footage is to visually witness the emotional space of Pearl Lion’s music, not to mention immerse oneself in a truly one-of-a-kind representation of Southwestern beauty. The title “Big Sky” definitively describes the visual and sonic feeling-it is all-encompassing, poignant and vivid.

Scharff shares his songwriting process for “Big Sky”: “I was in L.A. and I just got this guitar pedal called ‘Big Sky’. I found this ethereal sound and instantly started playing what became the song ‘Big Sky’. It felt more like I was channeling the song than writing it. The sound and melody just kind of hypnotized me and hit me emotionally. I had no idea why, or what this song was about, or where it came from but it felt universally connected to everyone in some way.”

Jared Scharff has been playing guitar in the SNL house band since 2007 and recently joined the house band for NBC’s brand new comedic variety show, Maya & Marty. Prior to landing these television spots, Jared had been a part of rock pop bands including Carbondale (RCA) and Jared Scharff and the Royals. When he was recommended for an SNL audition, Scharff simply couldn’t say no. Over the last nine seasons, outside of SNL Scharff has had the opportunity to perform with acts including Mick Jagger, Jeff Beck, Elton John, Bruno Mars, Bruce Springstein, Beyonce, Lady Gaga, and Maroon5.

In addition to performing weekly on SNL, Scharff produces and writes on various records, including Kat Dahlia’s “Mirror” and The Chainsmokers/Tritonal’s “Until You Were Gone”, as well as plays guitar on albums including Sara Bareilles’ Waitress. On his popular YouTube series Unnecessary Shredding, Scharff takes today’s biggest pop songs such as “Blank Space” (Taylor Swift) and “Don’t” (Ed Sheeran) and jams over them. The #UnnecessaryShredding hashtag has become a popular one amongst guitarists now uploading their own versions of Scharff’s concept.

Pearl Lion, Scharff’s instrumental solo project, is gearing up to simultaneously unveil two mini albums, Light and Dark, later this year as two halves of a whole. The release will be Pearl Lion’s brainchild, having written, produced and played instruments on both mini albums. “Big Sky” is from the mini album Light, which occupies a literally “lighter” soundscape than that of Dark, which is rife with heavy electric guitars, hard-hitting drums and pulsing synths. To date, two songs have been released off the mini albums in addition to “Big Sky”: “Alpha4” (from Dark) and “On My Way Home” (from Light). Previously released tracks are available for streaming on Soundcloud, here: http://www.soundcloud.com/IamPearlLion.