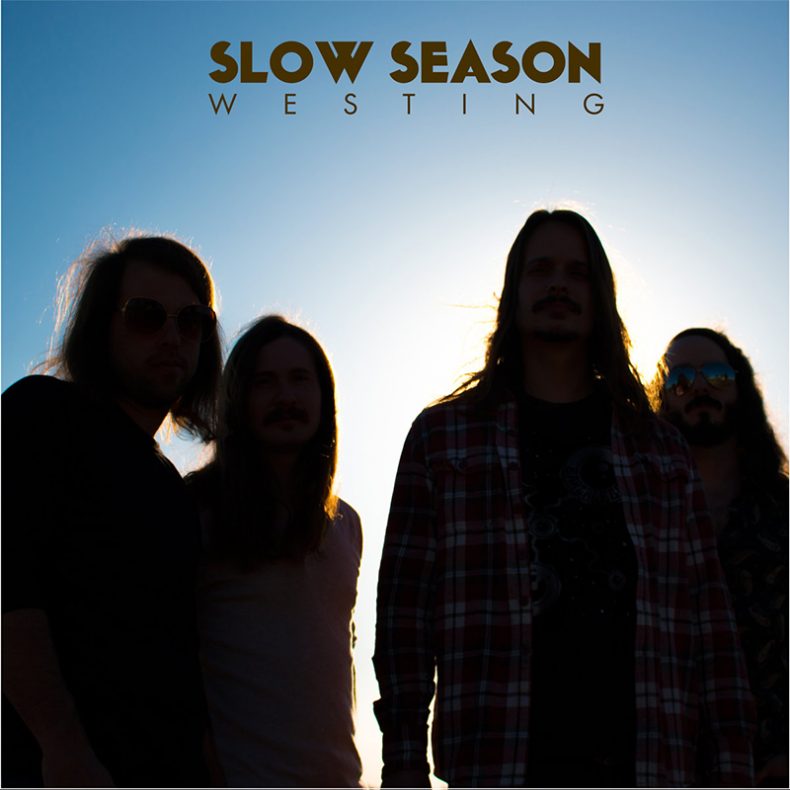 Slow Season is currently in the midst of another headlining U.S. tour, running to late June. Please see current dates below.

Contrary to the band’s name, downtime is a rarity for Slow Season. Sandwiched between summer 2015’s extensive tour with their RidingEasy labelmates Mondo Drag and Electric Citizen, plus several short west coast jaunts, the hard-working quartet also found time to hammer out its most powerful and ambitious album yet. Written, engineered, produced and mixed themselves on their own equipment, entirely on analog tape, Westing is a hard-hitting and powerful reminder of how at one time a rock ‘n’ roll band could be a transcendent experience.
While Slow Season’s sound continues to effortlessly nod to the great bands of the 60s-70s, Westing is truly the sound of a band coming into their own. The songwriting is tight, howling and hypnotic. The sound is classic, yet refreshingly new.
“It’s a different album,” says drummer and primary recording engineer Cody Tarbell. “But we never have wanted to find a particular sound or any one thing and be attached to it permanently. A big part of our records is experimenting.” The Visalia, CA band — Daniel Rice (vocals, guitar), David Kent (guitar), Hayden Doyel (bass), and Cody Tarbell (drums) — has recorded all of their albums on reel-to-reel at Tarbell’s home studio in a cornfield. This affords them the time to experiment getting sounds, while maintaining focus on the most important notion that performance is key. As with previous albums, recording was pretty immediate, tracked between January 15th and the beginning of February 2016 to 16-track tape and mixed to 2-track tape.
Equally as ambitious as the band’s self-sufficient production is the sprawling lyrical theme to the album. Thematically picking up where the Slow Season’s previous full length Mountains left off, Westing tackles some heady issues.
“Westing follows a loose narrative about our nation’s loss of innocence as it explores its frontiers,” vocalist Daniel Rice explains. “Re-contextualized in a story about an unnamed protagonist faced with choosing between different ideological allegiances and his own social identity.” From song to song, the album follows what Rice explains as, “the unholy trinity of greed+power+violence, the injustice wrought from this, persisting in willful ignorance, and reaping what is sown.” A deep conceptual arc, for sure, and one that adds further weight to the Slow Season’s intensity.

Album opener “Y’Wanna” erupts from the speakers as if the band couldn’t even wait for the tape to start recording. it’s a full-throttle rocker reminiscent of Zep’s “Immigrant Song” with sly reference to “Four Sticks”, all groove and pummel. “Flag” keeps things rolling along with its bouncing, stop-n-go guitar riff. The 6/8-time blues sway of “The Jackal” echoes early Sabbath malefic boogie, while “Saurekonig” is a cavernous and volcanic mass driven by huge drums, ringing slide guitar and ominous drone. “Damascus” is a rollicking anthem driven by Tarbell’s syncopated hi-hat/snare interplay and Rice’s explosive wail proving just how much of a dynamic powerhouse Slow Season has become. Throughout, Westing is a smart and snarling rocker that sounds like rock ‘n’ roll records should: massive, infectious and inviting repeat listens.
Westing will be available on LP, CD and download via RidingEasy Records on July 8th, 2016. Pre-orders include a free immediate download of the first two singles and are available HERE.