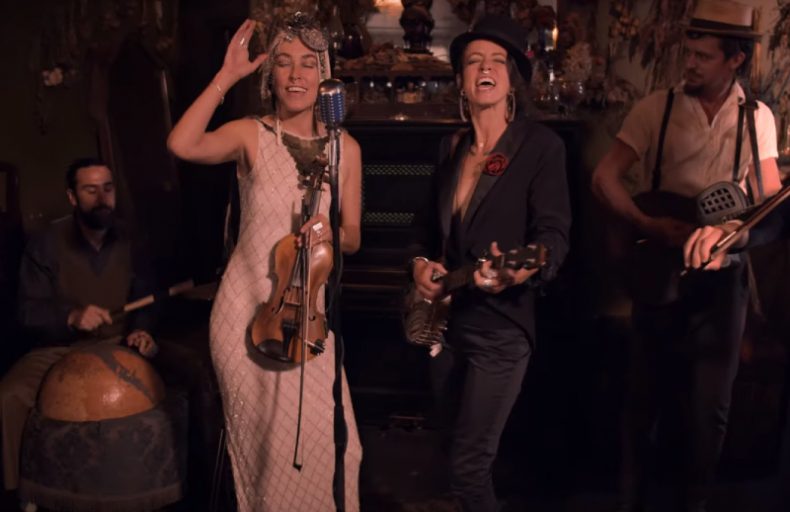 America’s adored World-Folk music group, Rising Appalachia, have already had a career-defining year and it’s not yet September. Sisters Leah Song and Chloe Smith have led the band to new heights in 2019; releasing their much-anticipated LP Leylines which was met with high praise from fans and critics alike. This week, the band released the official video for the song “Cuckoo” via Billboard Magazine, who called the song a “perception changer” that “channels their southern roots.” Later next month, the band will showcase at AMERICANAFEST in Nashville, TN before kicking off a two month Leylines release tour in Telluride, CO on Sept. 20.

The video for “Cuckoo” showcases Rising Appalachia’s unique view of the south. Song shares with Billboard that “my sister [Chloe] and I have spent the last 10-plus years of our chosen career really wanting to tell our version of a very ornate south that is vastly diverse and mystical and magical—and not what is often the stereotypical delivery of the southern story.” The “creative intention” behind the band is in part an attempt to shine a new light on the south and to showcase the region’s creativity and diversity. The song itself is an adaptation of a traditional fiddle tune, and was taught to the sisters by their mother who prioritized cultural richness and diversity in their upbringing.

Leylines has been a defining record for the sister-led band, garnering praise from a wide swath of critics and solidifying their place in the greater Americana musical movement. Brooklyn Vegan called “Speak Out,” one of the album’s standout tunes featuring Ani DiFranco, “an appealing dose of fiddle-fueled folk and close harmonies.” NPR praised album closer, “Resilient,” as an “uplifting, original folk anthem” and Rolling Stone called their sound “protest music for the modern age bolstered by delicate, skillful musicianship and otherworldly vocal harmonies.”

As the calendar flips to September, the band will showcase their distinguished brand of World-Folk music in Nashville at AMERICANAFEST. Advocacy has always been an important part of Rising Appalachia’s musical mission. Fans and fellow artists looking to join the conversation of using one’s talent for the greater good should consider attending one of the panels Leah and Chloe will be speaking on regarding how to best match music and mission. A full schedule of appearances and showcases can be found below.

For the entirety of the band’s fall tour, Rising Appalachia is offering a limited number of VIP packages for each show. VIPs will receive early entry into the venue, an intimate pre-show acoustic performance and a group conversation with the band, as well as early access to the band’s tour merchandise, and a signed collectible tour poster.